Home »Immigration»Legally Here, Only to be Deported 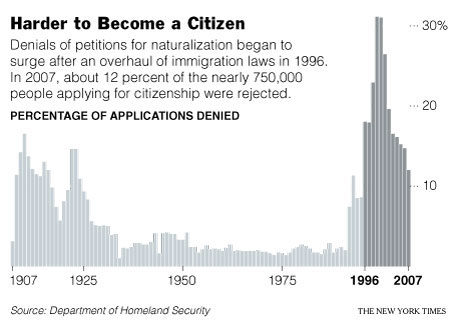 That is the story 89,683 legal permanent residents of the United States last year, who were denied naturalization and are now facing deportation proceedings.

The CIS is turning down more cases of naturalization than ever before since the 1996 law that increased scrutiny of citizenship applications. In some cases, the Board of Immigration Appeals (BIA) has had to step in and overturn CIS decisions. One notable case is the Matter of Lovo in 2005 where the BIA overturned several CIS decisions against family petitions that included a post-operative trans-sexual and her/his partner. And despite internal memos, transgender and overtly feminine or masculine applicants for citizenship continue to face harassment and inappropriate scrutiny from immigration officials.

Why is it so difficult to naturalize after gaining legal permanent residency? Well, the reason could be as small as forgetting to update your home address and be charged with a felony for ignoring a notice sent by immigration officials. And this “aggravated felony” (yes, unopened and returned mail to the CIS) precludes someone from gaining U.S. citizenship. And before you know it, you are being deported for not updating your home address.  Or you could fail to show up at the INS for being fingerprinted since you are a quadriplegic as in the case of Marin Turcinovic who is now fighting deportation. More cases of former legal residents now fighting deportation can be read at the New York Times here.

Why would someone want to apply for citizenship, given the 12-33% heightened risk of rejection? Without American citizenship, one cannot vote or travel with an American passport. Also, family reunification is expedited with citizenship. Also, citizens cannot be deported for small crimes and misdemeanors and retire with social security benefits, and other tax benefits unlike legal permanent residents.

Yet, given the risks and difficulties of doing everything legally and still ‘getting screwed,’ it is no wonder that many choose to enter and remain illegally in the United States. But the beneficiaries of the DREAM Act did not choose to enter the country illegally and all that the legislation does is give children and young adults the chance to meet some criteria for conditional residency. When the time comes for citizenship applications, some of us would have great difficulties becoming citizens and may just be ordered for removal unless the system of senseless heightened scrutiny is fixed.