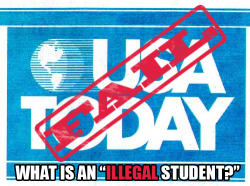 Immigrant students and supporters barraged USA Today offices with calls, demanding to know exactly what the so-called “No 1. Newspaper” in America meant by the phrase “illegal students” as used in this offending article.

One particular student was told that the newspaper had a definition for “illegal students” and that it would be emailed to him. 48 hours later, we are still waiting for clarification while USA Today is grappling with the reality that categorizing immigrant students as “illegal students” is not acceptable.

2. Cease and desist on this inaccurate and hateful policy.

3. Publish an apology and retraction

Please do sign the petition, blog and cross-post about this issue, keep tweeting and following @USATodayFail, and also join our Facebook group to stay up to date. While you are at it, don’t forget to get your “What the Heck is An Illegal Student?” button from Zazzle.

This post will be updated for running commentary on who has signed on to call out USA Today.

Yesterday, Vice President of the National Council of La Raza sent us an email blasting USA Today reporter Emily Bazar with this statement:

Any implication that we would agree to or condone the use of “illegal student” is just patently false.We never ever use the word illegal when referring to a human being and never would.It is offensive, pejorative, inaccurate, and grammatically incorrect.”Illegal student” is not only wrong on substance and grammar grounds, it is just plain laziness on the part of people who purport to adhere to journalistic standards.

NCLR is getting set to make release a bigger statement by next week.

And Erin Rosa from Campus Progress declared that it was nearly impossible to be an “illegal student” in the United States, no matter what USA Today meant by the hateful terminology.

Imagine 2050, ran by Center for New Community, which has bravely fought back nativist terminology and exposed the anti-immigrant hate network, cross-posted a post of mine from The Sanctuary.

America’s Voice wrote in support of our organizing efforts, which was later cross-posted at the Reform Immigration for America campaign site, sending us a positive message that the national campaign for immigration reform stands with immigrant youth.

Latina Lista set the tone today with a great source post, later cross-posted at YLSE, in which she declares that using the term “illegal student” might just be more harmful than saying “illegal immigrants:”

Considering that these students are all young people who are having a hard enough time trying to make sense of a life that they didn’t choose for themselves, but are doing their best to make it work — and academically excel at it, shows a gross insensitivity on the part of mainstream media to their feelings and the delicate emotional situations these students find themselves in by labeling them with a term already identified as dehumanizing and insulting.

DREAM Act Texas explored illegal verbage, agreeing with us that USA Today used the term inaccurately since “in the United States there are no illegal students. According to a Supreme Court ruling, all students, regardless of residency status, can legally attend a school or university.”

If you can, keep making calls throughout the weekend to the following numbers and leaving your messages: