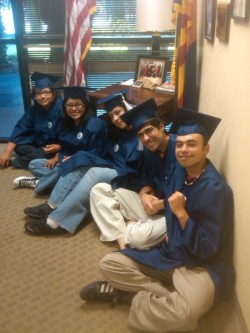 They sat down and risked deportation to countries they do not remember, and even threats to their lives, just to get everyone else to stand up for the immediate passage of a standalone DREAM Act.

Three immigrant youth leaders — Mohammad Abdollahi from Michigan, Yahaira Carrillo from Kansas, and Lizbeth Mateo from California — are being held at Pima County Jail to turn over to Immigration and Customs Enforcement after getting arrested for their six-hour sit-in at Senator John McCain’s Tuscon office yesterday. They could be taken to either Florence or Eloy Detention Center, where they face removal from the United States (and other horrors). Mohammad, in particular, faces grave consequences given that he would be deported to Iran, where he would most likely be killed for being queer.

Undocumented youth have waited 9 long years for passage of the DREAM Act, which would allow them to adjust their status in the United States provided they meet certain conditions: they must have been brought here before the age of 16 and be currently under 35, maintained continuous presence for 5 years, have good moral character (as in no criminal record), and complete either 2 years of college or military service.

Led by Mohammad Abdollahi from DreamActivist, the “DREAM Act Five” (referring to the original five that occupied Senator McCain’s office) demand that the DREAM Act be the standard for subsequent immigration reform proposals and not bundled with an unpopular comprehensive immigration proposal that puts enforcement first, promotes invasion of privacy through biometrics, and continues to criminalize immigrant communities.

“Never in our history has it been American to deny people their civil rights. We have decided to peacefully resist to encourage our leaders to pass the DREAM Act and create a new standard for immigration reform based on education, hard work, equality, and fairness,” said Mohammad in a press release issued yesterday.

According to Lizbeth, 10 other states have introduced legislation similar to SB 1070, “legislation that is anti-family, anti-democratic, and anti-freedom. Police states and enforcement are quickly becoming the standard, and we are running out of time. We are going to pass the DREAM Act because it is based on freedom and equality.”

These young leaders want Congress to bring the DREAM Act up for a vote by the deadline of June 15 this year. And they are willing to give their lives for it.

Mohammad, Yahaira and Lizbeth already have the support of a growing movement of undocumented students who are organizing for the DREAM Act. But it is critical for them to gain the support of D.C.-based immigration reform groups and especially the Reform Immigration for America campaign that wants immigration reform to be comprehensive. Immigrant youth are tired of broken promises and convinced that they are being held hostage.

As reported on Sunday, the immigrant youth movement lost two pioneers, fighters and leaders in Tam Tran and Cinthya Felix, who passed away in a tragic car accident.

“We are going to give Tam a great documentary to shoot,” the undocumented youth proclaimed, referring to Tam’s passion as a filmmaker, before sitting down for their right to live and contribute to the only country they call home.

Mohammad, Lizbeth and Yahaira have played their roles. It’s now up to everyone else to write and carry out the next part of the script.