Home »Immigration»Chinese-American Man is "Too Yellow" for a U.S. Passport 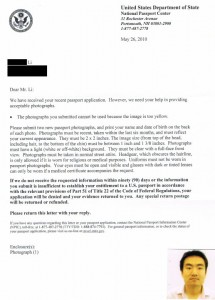 If Homer Simpson were to apply for a United States passport, he’d be rejected, even though he is a U.S. citizen. It’s not because he’s a fictional character. It’s because he might be “too yellow.”

The latest State Department gaffe making the rounds is a letter to a Chinese-American man rejecting his passport photo for being “too yellow.” Apparently, some Asians now look “too yellow” for the United States to issue them passports.

Considering how the State Department is supposed to represent the diplomatic side of our government, the lack of tact in the letter is appalling.

I wonder if they have rejected photos from Blacks saying the photo is “too black.” Maybe using the phrase “too yellow” is better than saying “too chinky” or “too Oriental.” Maybe.

How exactly is Mr. Li supposed to send in an “acceptable photograph” when what’s pictured is, in fact, his skin color? Maybe the State Department will start encouraging applicants to use Photoshop to make their photo look less yellow so they meet specifications.

Fortunately for Mr. Li, even if the State Department has rejected his passport application, his skin color shouldn’t affect his right to reside in this country.