Home »Immigration»Furor Over the 'White' Prince of Persia Is Misplaced 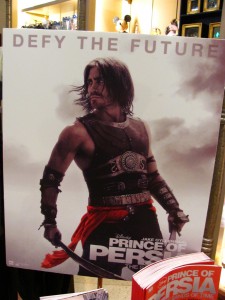 In summer blockbuster Prince of Persia: Sands of Time, Hollywood delivers one of the most positive portrayals of Persians we’ve seen from the industry. Alas, though: the actor playing the Persian prince turns out to be an American of Swedish and Jewish descent.

From John Wayne playing Genghis Khan to Tom Cruise as the “Last Samurai,” Hollywood has a long history of white-washing ethnic minority characters. As fellow Race in America blogger Adriel Luis writes, with its latest film, Hollywood appears to be saying that Iranians are cool, but only so long as they are Persian and white. At this point, actor Jake Gyllenhaal is creating furor for his lead role as Disney’s Persian prince, sparking accusations from many about Hollywood’s inherent racism.

But bloggers familiar with video games are pointing out the fact that Prince of Persia — as a video-game — has long white-washed the character and plot-line, choosing to depict Persia as an exotic adventure straight out of Arabian Nights. So the movie naturally followed suit. Not that it’s any excuse.

Hypothetically, one can make the case that since gay actors have played straight roles and vice-versa, the selection of Gyllenhaal shouldn’t be a big deal. Maybe, but such a comparison is apples and oranges: sexual orientation isn’t a visible, physical characteristic like skin color.

Being Persian and white or Jewish are not mutually exclusive. But did blue-eyed Jake Gyllenhaal — who sports a quasi-British accent in the film — really get the part of the Prince of Persia because he nailed the audition for the role? If that was the case, maybe his casting would have been more legitimate.

But in all likelihood, Gyllenhaal was roped in for the part to draw audiences to the box office who might otherwise stay away if the lead was a lesser-known actor of Persian descent. If that’s the case, the casting has less to do with, racial discrimination, and more to do with questions of who could save an otherwise bad movie from tanking at the box office.

While his skin or eye color might not be a huge problem, Gyllenhaal’s fake British accent (which is supposed to supply some shorthand for nobility) makes him seem utterly mis-matched with the movie’s plot. Maybe Gyllenhaal should have taken more pointers from Sir Ben Kingsley, who plays his brother in the Prince of Persia, and effectively portrayed Gandhi more than 25 years ago.

The good news is that audiences saw through Hollywood’s trick and delivered their verdict for the Swedish-American Prince of Persia: he’s a dud. Now if only they could get equally mad about all the trashy and pointless movies Hollywood releases each year — that might be something really worthwhile.