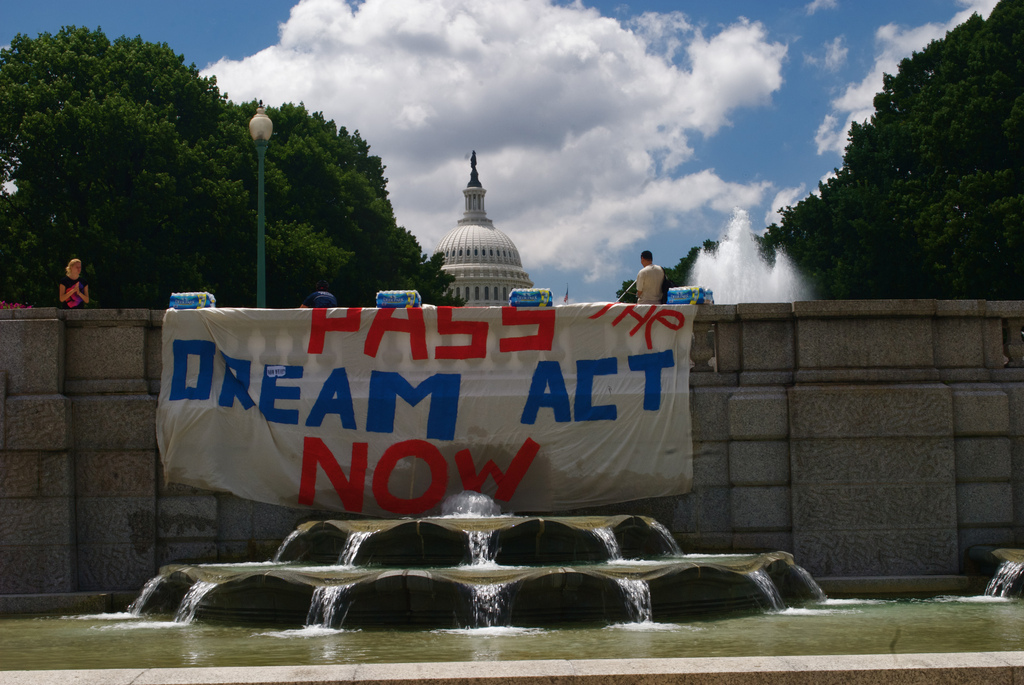 Sen. Chuck Schumer (NY), Sen. Dianne Feinstein (CA), Sen. Robert Menendez (NJ), and Sen. Harry Reid (NJ) are meeting with immigration reform advocates today to determine whether Congress can move forward with piecemeal immigration reform this year. The meeting’s attendees include Gaby Pacheco from the Trail of Dreams, advocates from the National Immigration Law Center, and the Reform Immigration for America campaign, which opposes settling for anything short of comprehensive reform.

Besides being Democrats, all four Senators have something else in common: they are all co-sponsors of the federal DREAM Act. With 37 Senate cosponsors, and growing support in the House, the bipartisan DREAM Act grants a much-needed pathway to citizenship for undocumented youth who have grown up in America provided they meet certain requirements. It looks like the the only major piece of legislation that has any chance of survival in this legislative session, granted that it moves forward as part of an amendment process — Democrats fear bringing it to the Senate floor as a standalone bill, since Republicans would have quite an outing tacking on stringent anti-immigrant amendments. However, multiple vehicles are available to carry the legislation forward, if only Senators have the political will and courage.

Here’s how the Senators meeting today measure up in terms of their willingness to move forward on reform:

Senator Harry Reid: Senate Majority Leader Reid has been adamantly against pursuing the DREAM Act as an independent bill, telling Latina Lista that “We can’t just do the DREAM Act” even though he is a co-sponsor. But the midterm elections might be a gamechanging “angel” for Reid. Given that Sen. Reid is miraculously trailing extreme right-winger Sharron Angle in his re-election bid, he might be open to making compromises if he wants Latino voters to come out to the polls for him in November.

Senator Dianne Feinstein: Despite numerous protests, mock graduations, and even a sit-down at her office by students, Sen. Feinstein has pursed her lips on the DREAM Act. In 2003, she contributed heavily to stripping the bill of a provision providing a pathway to citizenship for undocumented youth doing community service. Her main immigration priority is the AgJOBs legislation to allow undocumented farm workers and guest workers to gain temporary legal residency, which would undoubtedly benefit the state of California. But if she decides to give AgJOBs a push in this legislative session, it may create an opening for other legislative pieces, such as the DREAM Act. The DREAM Act is also critical for California since 40% of undocumented students reside in the state.

Senator Robert Menendez: The only Latino Senator in Congress, Roberto Menendez is a wildcard. He recently chided President Obama for sending 1300 troops to the border and accused him of political grandstanding, asking the White House and Congress to champion comprehensive immigration reform instead of using border security to hide behind the issue. According to Sen. Schumer, Menendez has been holding the DREAM Act hostage in the Senate because he wants a comprehensive solution and believes in moving forward with reforms in the lame duck session after November. Refuting Schumer’s claims, several inside sources say that Menendez is willing to move forward with just the DREAM Act this year.

Senator Chuck Schumer: The target of a 10-day hunger strike by DREAM-eligible students, Schumer was supposed to introduce a comprehensive immigration reform legislation on Labor Day last year, but now is giving a timeline of next March. Sen. Schumer has little incentive to give any political victories to Sen. Reid, since Schumer would more than likely become the new Majority Leader if Reid loses his re-election bid. Schumer insists that he needs five more cosponsors for the DREAM Act to move forward, but he must also the bill’s success would give a victory to the DREAM Act’s main co-sponsor, Sen. Dick Durbin, who is the Assistant Majority Leader and also vying for the Majority Leader position. Schumer may be the biggest roadblock to any immigration reform legislation moving forward due to his own political ambitions.