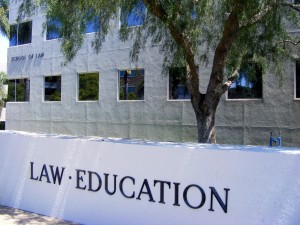 Now that it’s the beginning of summer, most admission decisions for law schools have already been made. If you’re a racial minority and failed to get into a good program, were you a victim of institutionalized discrimination?

These statistics matter, because they make it clear that law schools aren’t progressing towards an inclusive admissions process — which in turn means that America’s lawyers are less diverse. Indeed, though African-Americans make up a little over 12% of the population, only 4% of students matriculating into law schools are African-American.

While law schools might not explicitly discriminate against racial and ethnic minorities, continued use of the Law School Admissions Test (LSAT) has a disproportionately negative impact on such groups. Admissions committees take scores from the LSATs quite seriously — in part because admitted students’ overall scores play an important part in how well law schools place in overall rankings, which use LSAT scores and grade point averages to help a school’s caliber.

But while the LSAT is supposed to measure logical reasoning, analytical skill and overall comprehension, it’s well-known that certain groups perform less well on the test — for reasons that have nothing to do with these qualities.

For example, numerous studies have shown that a psychological phenomenon known as the “stereotype threat” tends to affect negatively stereotyped students’ performance. A 2002 study found that after adjusting for initial differences in SAT scores, black students at Stanford University who took a challenging verbal test answered approximately 10% fewer questions correctly than whites — but only if they believed that the test was a measure of their ability. If they were told that the test measured “psychological factors involved in solving verbal problems,” the black-white test score difference was eliminated.

It’s not just about the psychology of race, either. There are indications that LSAT scores are testing levels of wealth, not logic. After all, LSAT prep courses are costly, both in terms of time and money. Someone working two jobs to survive economically is far less likely to have the time and money to study for the test, compared to someone born into privilege. And as we all know, class in the U.S. is intricately linked with color.

To be fair, law school admissions programs do employ corrective policies such as affirmative action. Yet such efforts aren’t enough to counteract the stereotype threat and existing wealth disparities.

While it’s true that the LSAT is one of the best predictors for how someone performs in law school, the fact is, doing well in law school doesn’t necessarily correlate with doing well as an attorney. Minority communities need power brokers and lawyers, too. Maybe it’s time that law school rankings incorporated measures of race and class diversity into their assessments, as well as LSAT scores?