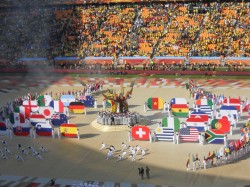 The son of Algerian immigrants inspired France’s team of immigrants to World Cup glory in 1998, but Zinedine Zidane does not have to be football’s only fairytale immigrant story. (American readers: “football” used here means “soccer.”) Immigrants and sons of immigrants have long enriched most successful international teams. From Italy’s consecutive World Cup wins in the 1930s courtesy of several Argentinians to the most outstanding Portuguese player of the 20th century hailing from Mozambique to the fact that most footballers at this year’s World Cup play in leagues outside their home country, football is clearly the ultimate migrant sport.

With a new ruling from the Federation of International Football Association (FIFA) allowing players to move more easily from representing one country to another, teams are set to get even more diverse. In the meantime, here is a quick look at some of the best footballers of immigrant descent on the field at the World Cup in South Africa, which began yesterday:

Additionally, the U.S.A. is relying on 21-year old son of Haitian immigrants Jozy Altidore to score goals up front.

The greatest sporting event on the planet is largely snubbed in the U.S. as an immigrant sport because first-generation immigrants are more likely to watch soccer than their American-born counterparts. While the anti-immigrant Center for Immigrant Studies has complained about the lack of loyalty that immigrants display to the U.S., many fail to realize is that practically all the U.S. stars—Landon Donovan, Hercules Gomez, Carlos Bocanegro, Sacha Kljestan, “Oguchi” Onyewu, and Tim Howard—have at least one immigrant parent or are immigrants themselves.