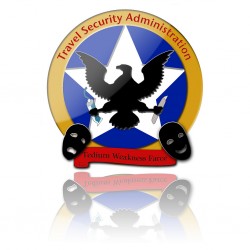 The Transportation Security Administration (TSA) must have read the inflammatory TIME magazine piece by Joel Stein about Indians taking over his beloved town of Edison, New Jersey. In their latest misadventure, their terror watch list ensnared a six-year-old Indian-American girl — Alyssa Thomas — from Westlake, Ohio, who was on her way to Minneapolis for a baptism ceremony.

Now why is a six-year-old girl from a respectable family on a terror suspect list? Is it because she may grow up to be a prospective spelling bee champion, graduate Valedictorian from high school, double major in physics and engineering through college, and become a nuclear scientist who may sell secrets to China?

No, TSA issued a statement saying that Alyssa was caught as a result of the “Secure Flight Program” that just went into effect in June for all domestic flights. Alyssa has been flying since she was two months old without any problems, but “the watch lists are an important layer of security to prevent individuals with known or suspected ties to terrorism from flying,” a TSA spokesman said. That still does not explain why a kid ended up on an FBI-created watch-list.

The Thomas family has appealed the inclusion of Alyssa on the list, but thus far, their request has been refused by the agency. Additionally, no one from the agency has revealed what criteria is used to place people on the list. Maybe it is simply arbitrary and they hand-pick the names from a lottery system.

In a related and more absurd case, TSA in Fort Lauderdale took extra precaution for eighteen-month-old infant Azaad Singh. He was patted down and his bag searched, revealing a couple of Elmo books and mini-mail truck.

The American Civil Liberties Union has finally filed a lawsuit over the no-fly list. Individuals who find themselves on the list can submit a complaint to the Department of Homeland Security’s Travelers Redress Inquiry Program (TRIP).

I get the need to secure Americans traveling by airplane from wailing infants and noisy kids, but that should not be the priority of the overbearing and self-indulgent agency.