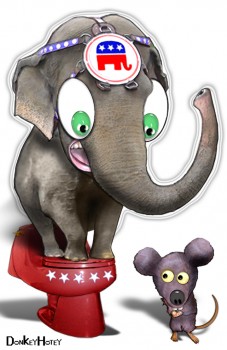 For those of you scratching your heads, here’s a list of the top 10 motivations behind this turnaround — and the reasons why they’re so wrong.

1. The 14th Amendment was never intended to benefit immigrants.

“All persons born or naturalized in the United States, and subject to the jurisdiction thereof, are citizens of the United States,” says the 14th Amendment. Anti-immigrant critics, though, say this crystal-clear guarantee was meant only to apply to African Americans, not children of undocumented immigrants. Media Matters, though, has debunked this claim, showing that some of the framers of the amendment did consider giving rights to immigrant children.

2. Sure, the 14th Amendment allows corporations to be considered as people. But extending the same right to U.S.-born children of undocumented immigrants? Blasphemy.

The GOP recognizes corporate personhood, even though Wall Street is responsible for putting thousands of jobless men and women on the streets. Yet children of immigrants who bolster our social security with billions and pick our fruits and vegetables apparently shouldn’t have citizenship in the United States. Go figure.

If we were to repeal birthright citizenship, as the GOP wants to do, we’d also be stripping citizenship from Governor Bobby Jindal (R-LA), former GOP Senator Pete Domenici and former Attorney General Alberto Gonzales, who all had non-citizen parents at the time of their birth. Henry Cejudo, the son of undocumented immigrants who previously won an Olympic gold medal for the U.S., would not have been able to represent the United States, either.

4. 14th Amendment reform is a matter of national security. We need to defend ourselves against terrorist babies.

Al-Qaeda members could cross the border between the United States and Mexico, “drop” babies that automatically become United States citizens and then take the babies back in order to train them to be anti-American. Years later, they could re-enter the United States without any scrutiny and cause massive havoc. It sounds like a Hollywood flick, right? But to GOP representatives such as Louie Gohmert (TX), the scenario is very real.

Funny, it’s also a matter of national security when someone releases a public hit list containing the names, phone numbers and addresses of Latino immigrants who are allegedly undocumented. But you don’t hear the same members of the GOP bewailing that fact.

5. Rule of law is convenient only when it benefits the GOP.

Conservatives purport to stand for rule of law” and for enforcing the laws on the books. Yet when it comes to the children of immigrants, they want to dismantle parts of the U.S. Constitution. Even Lou Dobbs agrees that this time, the Republicans have gone too far. But since we’re so keen to change laws to suit our various ideologies, why not throw out the 2nd Amendment, too? It was certainly never intended to give everyone the right to own guns. Maybe we should strike away all the laws that we don’t like from the books. Extreme, but you get my point.

The GOP has a Latino problem. While Latino support for Obama has dropped substantially, only 15% of Hispanics identify as Republicans. By 2050, Latinos will be nearly 25% of the U.S. population. By attacking immigrants and alienating Latinos still further, the GOP is shooting itself in the foot.

Gutting the 14th Amendment won’t solve the issue of illegal immigration. Instead, it will create still more stateless and disenfranchised young people. As Senator Bernie Sanders (I-VT) says, the issue here is 100% political. The GOP knows they won’t actually manage to eliminate birthright citizenship, but they’re race-baiting before the midterm elections anyway. Instead of trying to come up with a solution to a broken immigration system, the GOP is just using immigration s a wedge issue.

8. Anchor babies have destroyed America and the American way of life.

Or so the GOP would tell you. But what do Benjamin Franklin and Thomas Jefferson have in common? Yes, they are considered the Founding Fathers of the United States. But they were also both anchor babies: born in the U.S. to overseas immigrants. Unless you are indigenous to this county, your ancestors also had anchor babies.

9. Mexicans have a brilliant, 21 -year plan on how to get their green cards, and we have to stop them.

If an undocumented immigrant gives birth in the U.S., that still doesn’t entitle them to stay in the country. Here in the U.S., many young American citizens are deported along with their immigrant parents. So are undocumented immigrants having babies as part of nefarious plot to win their U.S. residency? Hardly. A citizen must be 21 in order to sponsor any relative for a green card. What’s more, the person being sponsored can’t be in the U.S. illegally. To be sponsored after being in the country illegally, a parent would have to return to their country of origin and face a 10-year ban before being allowed to re-enter the United States. Altogether, it would take anywhere between 21 to 31 years for an anchor baby to successfully sponsor their parents for U.S. residence.

10. We can’t allow the U.S. to become a majority-minority country.

Make no mistake: it’s all about race. The GOP isn’t scared of Canadian anchor babies. It’s scared of Mexican ones.