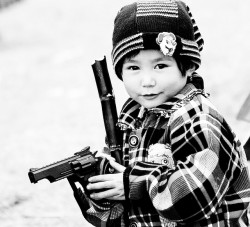 If you thought you had heard enough wacky things from the GOP in the past week, think again.

Recently, Texas State Republican Debbie Riddle went on Anderson Cooper 360 to present a special edition treatment of “Crazy Jihadi Babies.” Apparently, the State Senator is convinced that pregnant mothers are bringing their babies to the United States to give birth and raise them up as terrorists that would attack the United States many years into the future.

For safe-guarding fortress America, no child should be left behind.

CNN anchor Anderson Cooper pressed for credible evidence on this GOP-manufactured terror baby plot but got nothing out of Riddle. “When your folks called me in the preliminary, that was part of the conversation,” Riddle said. “They did not tell me you were going to grill me on specific information that I was not ready to give to you tonight. They did not tell me that, sir.”

How Debbie Riddle got elected to office is definitely a riddle, but it is Texas after all. The State Senator was probably inspired by another fellow Texas Congressional representative, Louie Gohmert. Remember his speech in the House concerning terror babies? Gohmert also invited by Anderson Cooper to present some evidence on this wild theory.

He could offer nothing besides condescending yelling and telling Cooper to “fill the gaping hole.” Gohmert was probably referring to the fact that the 14th Amendment allows anyone born here to be a citizen of the United States and that is unconscionable given the threat of undocumented immigrants coming here to have babies. In other words, the U.S. Constitution is the gaping hole for this Texan Republican.

No wonder only 24% percent of Americans feel positively about Republicans. The same 24% probably think that Obama is the Anti-Christ and wants the terrorists to win. Clearly, a quarter of Americans are delusional, but I digress.

Tom Fuentes, who served as the FBI’s assistant director in the office of international operations from 2004 to 2008, debunked the myth of terror babies for Anderson Cooper. “There was never a credible report — or any report, for that matter — coming across through all the various mechanisms of communication to indicate that there was such a plan for these terror babies to be born.”

It sounds like there is a big gaping hole in the heads of both Rep Gohmert and Rep Riddle.

Why are we entertaining this 1950s badly-written science fiction movie beyond the fact that it is amusing?