Home »Immigration»Governor of Virginia: I Can't Support the DREAM Act 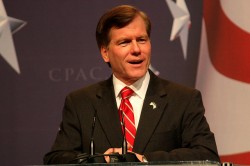 When Isabel Castillo, a resident of Virginia for the past 19 years of her life, asked Governor Bob McDonell for his view on the DREAM Act, he was stumped for a bit.

Moving forward, he recognized that she had not taken the opportunities in America for granted, but the Governor stuck to the old rhetoric of needing to enforce the laws and secure borders. When pressed for an answer, McDonell stated that he could not support the DREAM Act because “what that basically does is look the other way, not support the law, and it allows someone who is illegally present to be given the same rights as a United States citizen.”

Actually, what McDonell did was look the other way. The law seems to function like a stagnant rhetorical device for politicians like McDonell, enabling their irrational criminalizing attitude towards immigrants who are just trying to work hard to support their families. Laws are made and broken every single day and most are never enforced. It’s not just a question of limited resources. Police officials would rather solve aggravated felonies than put people in jail for violating minor traffic laws.

We are also faced with laws that make little sense — why is a minor child punished for not having the right or ability to apply for legal status in the United States? Punishing students like Isabel serves neither utilitarian nor retributive theories of punishment, especially since no crime was committed.

There’s little doubt that laws enabling slavery and Jim Crow were misguided and unjust, to say the least. What undocumented students like Isabel Castillo are working towards is a change in the procedural nature of the law with respect to their immigration status. It’s actually not that significant of a change. McDonell is not just saying that he cannot support the DREAM Act; he’s actually saying that he does not support changing the law in a manner that is more just and humane.

Of course, the Governor of Virginia has no say on the federal DREAM Act so it was probably not the best question to ask him. Rather, McDonell should face heated opposition about the constant requests he has made to the Department of Homeland Security to train local law enforcement and state troopers in Virginia as immigration agents.