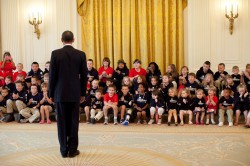 It looks like President Obama does have the cojones supposedly required to enforce immigration laws.

Newly released reports from Immigration and Customs Enforcement (ICE), shows that during the first nine months of FY 2010, 279,035 non-U.S. citizens were removed from the country as a result of ICE enforcement. The number is 10% higher than the figures from the same period in FY 2008 under former President George W. Bush.

The figures establishes one very important fact. For Governor Jan Brewer, Sarah Palin et. al, the figures means that Obama has relatively bigger cojones than Bush and that makes him more of a man. Congratulations Mr. President.

But that is not all. The figures also tell us that Obama’s cojones are smarter than the one belonging to his predecessor. (That probably is not too surprising.) Between FY 2005 and FY 2009, immigration enforcement targeted mostly non-criminal undocumented immigrants. Under the Obama Administration, ICE removed undocumented immigrants who have committed crimes at a rate 60% higher than the last year of the Bush Administration.

That would be impressive if the removal of “criminal aliens” actually meant the removal of violent immigrants from our society. Most of the undocumented immigrants removed as criminals are non-violent offenders and some are put into deportation even without a conviction.

If anything, the statistics establish that immigrants do not have a friend in the White House and President Obama has not figured how to craft an immigration policy that treats the problem of a broken immigration system rather than the symptoms of it.

But the right wingnuts are still running scared about Obama and his amnesty program.