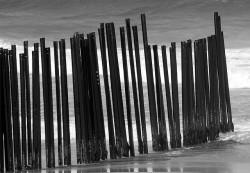 The bill would fund 1,500 new border patrol agents and underwrite more unmanned aerial drones to provide border surveillance. It will also avoid adding to the deficit by raising fees on a handful of foreign corporations that abuse U.S. visa programs to import workers from India.

The Senate Democrats are trying to show that they are tough on enforcement in order to corner Republicans on the issue of immigration reform. By appeasing to calls to secure the border, Democrats are giving the GOP fewer excuses for inaction on broader immigration measures pursued by Democrats. Politically, this makes sense, but the pay-off is largely questionable since the move does not garner any legislative support for immigration reform. Instead, Democrats are playing into the false right-wing “get tough on immigrants” and “secure the border” framework that does not assure a just and humane immigration legislation.

“They know that hundreds of millions more in border funding won’t crack down on illegal hiring, won’t deal humanely and practically with the 11 million undocumented immigrants settled in the U.S., and won’t reform the legal immigration system going forward. But hey, this is Washington, where gamesmanship trumps statesmanship,” said Frank Sharry, Executive Director of America’s Voice.

Even President Obama, who requested the funding, knows that the additional money won’t solve the issue. In his speech at American University last month, the President stated that “our borders are just too vast for us to be able to solve the problem only with fences and border patrols. It won’t work.”

Idealized maps clash with lived geographies when it comes to the border between United States and Mexico. Contrary to perceptions of spillover drug violence and lurking dangers on the U.S.-Mexico border, violence along the 2,000 mile stretch has steadily declined. Enforcement is so rampant that undocumented immigrants are detained on their way back home. Tightening border security with more troops and money is a cheap political ploy that endangers more migrant lives as they cross through harsher terrains in order to avoid surveillance.

There are more resources dedicated toward border security today than ever before with over 23,000 U.S. Border Patrol agents equipped with best technology money can buy and a $17.2 billion budget for FY 2010. When exactly would the border be secure enough for the right-wing nuts insisting on more funding and resources? There is no tangible measure because the ask is not grounded in reality, but rather a panicky need to keep brown immigrants out of the United States.