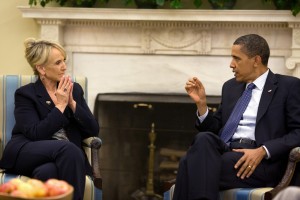 This weekend on Fox News Sunday, former Alaska Governor Sarah Palin boldly declared that Arizona Governor Jan Brewer had something that Obama lacked when it came to securing the border: cojones.

“Jan Brewer has the cojones that our president does not have,” Palin said. “If our own president will not enforce our federal law, more power to Jan Brewer.”

Cojones is a vulgar Spanish word for testicles, which translates to “balls” in English. Yes, Brewer has plenty of nuts in her administration, but that’s probably not what Palin meant. Her words were intended to emasculate President Obama, who Palin and her adherents see as not doing enough to “secure the border.”

In the Fox News narrative, Sarah Palin and Jan Brewer are both seen as more manly than the first African-American President of the United States. You see, Governor Brewer has the balls that President Obama does not have, while Sarah Palin has the cojones to actually state as much on national television. T

Let’s take a few steps back here. When did manhood become a prerequisite for “securing the border” — itself empty rhetoric that serves as an excuse for inaction on immigration reform? It doesn’t take “balls” to make a sound immigration policy.

The idea that Obama is not enforcing immigration laws isn’t borne out by the facts. Border security spending and deportation numbers have actually skyrocketed under the Obama Administration. Of course, the President can’t trumpet his tougher stance on immigration enforcement without alienating his own base. Instead, he’s caught in a catch-22 situation — and stuck getting called a “girly man” by right-wingers.

The good news? As a black man, Obama has the unique chance to break through old stereotypes that paint black men as foul-mouthed, brash, bestial, highly sexualized and lacking in intelligence. Even as Sarah Palin and Jan Brewer taunt him from the sidelines, the President has been able to project a brand of hope and change that shows mainstream America that it has nothing to fear.

Could Obama lash back out at Palin? Not without being perceived as a “brute” — a man who’s threatening white women. It’s an old stereotype that taps into deep-seated white insecurities and fears, and one that Obama has to be careful about triggering at all times.

Accordingly, no matter what kind of mud Palin tries to sling, Obama has to keep his cool. Right now, his real goal needs to be changing the narrative to focus on the real policy issues — not foolish personal attacks. Fortunately, Obama seems to have the balls to keep doing just that.