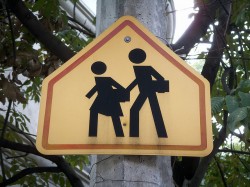 The culprits are the Unified School District of Calexico — just across the border from the city of Mexicali — and the Mountain Empire School District, just east of San Diego, who have exclusively hired staff to strengthen implementation of school district residency requirements. “Sorry niños, you cannot come here to learn Math and English. But you can certainly become a maid, gardener or pick tomatoes that I can buy for cheap from the grocery store.”

Before the anti-immigrant crowd starts scapegoating K-12 kids for the California state budget crisis, do note that California prison spending is growing while the state budget is shrinking, in large part due to Prop 13 and the rollback of vehicle license taxes. California’s per-pupil spending puts it at the near-bottom relative to other states. An alleged dozen students from across an arbitrary border is not creating a gaping state deficit.

In Plyler v. Doe, the Supreme Court found that a Texas statute withholding from local school districts any state funds for the education of children who were not “legally admitted” into the United States, and authorizing local school districts to deny enrollment to such children, violates the equal protection clause of the Fourteenth Amendment. But schools along the border can argue that they are simply pursuing district residency requirements and not necessarily targeting students for their immigration status, which blurs the line.

Besides, Mexican citizens, including children, are required to show their passports and other documents when they cross the border. Do they really expect us to believe that large numbers of Mexican children go to American schools by crossing the border every day? At the least, they stay with their families in the United States and don’t have proper immigration status, which makes it illegal for school districts to target them.

The downside for the school district is that if it finds students from Mexico in attendance, then it may just lose money from the state Department of Education. As an example, the state Department of Education in Arizona demanded that the Ajo Unified School District return $1.2 million that officials claimed was invested in more than 100 students who allegedly crossed the border to attend school in their district.

So there is no advantage to the school districts for implementing such a policy. It certainly is not saving money to allocate it towards better programs and services. No, the policy is inspired by pure hatred and maybe some desire to act like border patrol, since it may be considered more patriotic than teaching all our children to read and write.