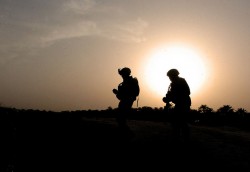 GOP Senate Minority Leader Mitch McConnell says that the DREAM Act is extraneous to the Department of Defense bill, but maybe he ought to read the legislation.

Besides the college route, the DREAM Act also allows young undocumented immigrants who have grown up in the United States and have no criminal record to serve in our military as a way to gain citizenship. Contrary to popular opinion, undocumented immigrants are barred from joining the military, even though they are actively recruited.

Three years ago, 17-year-old Jonathan aspired to join the Navy and the Navy wanted him. He was young, healthy, bilingual, and intelligent, with good moral character and a willingness to die for his country — the United States of America. Alas, Jonathan was undocumented because he was brought to the country at the age of 11 by his parents and overstayed his visa. The recruiters promptly left when they found out about his status and the family moved away for fear of deportation.

Twenty-year-old Sebastian, brought here by his parents more than ten years ago,  wanted to join the military, but his dreams were dashed when he was rejected for his immigration status. “People like me, we want to serve the country. We love this country. We don’t have papers. We can’t afford to go to college. The military is the perfect option for us.” Instead, he had to work at a seafood joint.

Jonathan and Sebastian are not alone. There’s countless others such as Noe Guzman, a high school graduate also willing to die for his country who discovered his undocumented status only when he tried to join the Marines and was put into deportation. And then there are queer students like Yahaira Carrillo, who was part of the ROTC in high school but could not join the military due to both Don’t Ask Don’t Tell and her undocumented status. These students are certainly not extraneous to the Defense Authorization Bill. They are important to maintaining our national security, supported by Pentagon officials, and highly sought after by recruiters.

Rachel Tiven, the Executive Director of Immigration Equality, an organization that advocates for equality for lesbian, gay, bisexual, transgender (LGBT) and HIV-positive immigrants and their families, says that “it is critical that Congress pass both DREAM and repeal of ‘Don’t Ask, Don’t Tell’ so that all young people have an opportunity to truly be part of the fabric of our nation.”

The United States military has had to significantly lower standards in the past few years. Recruiters have accepted people with lower aptitude scores and no high school diplomas; raised the maximum age of enlistment to as high as 42; offered millions of dollars in signing, promotion, and retention bonuses; taken people with medical problems; and even used “moral waivers” to enlist persons with criminal records. All the while, we have thousands of young undocumented students on the sidelines, ready and willing to serve and die for this country.

There’s certainly a moral dilemma in creating what has been called a de-facto draft for young Latinos. But this has been addressed here and on many occasions as a matter of supporting the fundamental rights and choices of our young generation.

Anti-immigrants will try to cast undocumented students as some horde of foreign invaders, but we are talking about students who are essentially American, who speak English and have grown up here. Moreover, Pentagon officials are enthusiastic about the DREAM Act. The Department of Defense has added the legislation to FY2010-12 Strategic Plan. Since the recruits would come fully vetted from the Department of Homeland Security, it would also save the Pentagon time and money in conducting criminal background checks. And the DREAM Act means that the military no longer has to lower standards for recruits. It is a win-win for everyone.