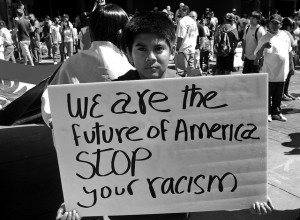 Federal district judge Susan Bolton handed the Brewer collective in Arizona another blow when she once again upheld key parts of a lawsuit against Arizona’s beaten down anti-immigrant law, SB 1070.

In particular, Judge Bolton upheld the claim that the Arizona anti-immigrant law leads to racial profiling and Fourth Amendment violations upon unreasonable searches and seizures by local law enforcement. The complaint filed by civil rights groups in Friendly House et al. v. Whiting et al. alleges that Section 2 of S.B. 1070 requiring officers to conduct unreasonable seizures of individuals based on a “reasonable suspicion” about their undocumented status increases detention time. In a realistic hypothetical, race as a proxy for immigration status increases the chances that Latinos would be “arrested” and taken down to the jail to prove their citizenship.

There are many reports of the Maricopa County police department in Arizona using race as a factor in arresting people, especially during immigration sweeps. Manuel de Jesus Ortega Melendres spent nine hours in police detention after a traffic stop that produced no citation and was even handed over to Immigration and Customs Enforcement even though he had a valid U.S. visa. David and Jessica Rodriguez were pulled over by cops and given a citation for suggesting that race was a factor in why they were stopped and did not get the benefit of a warning as opposed to other Caucasian drivers who only received warnings. MSCO also wrongly targeted Latino U.S. citizens Velia Meraz and Manuel Nieto, Jr. during an immigration sweep chiefly due to the fact that they were Latinos playing Spanish music in their car.

Even Arizonians agree that racial discrimination is on the rise, with 48 percent stating that Latinos are more likely to be discriminated with the passage of SB 1070. It is not a wonder then that Judge Bolton agreed that the complaint contained “adequate allegations that race, alienage, or national origin discrimination was a motivating factor in the enactment of S.B. 1070.”

Note that the DOJ lawsuit does not mention the prospect of local law enforcement racially profiling Hispanics and thereby violating their Fourth amendment right to be free from unreasonable searches and seizures. The federal lawsuit merely relied upon the question of federal pre-emption, which does not necessarily bode well for furthering immigrant rights. After all, the Obama Administration is actually furthering the cause of Arizona by creating mini-Arizonas with programs like Secure Communities.

It’s heartening to see the lawsuit go forward and hopefully, a discussion of racial discrimination would ensue in a legal arena that is quite uncomfortable when it comes to dealing with such matters.

The full text of the opinion is here: