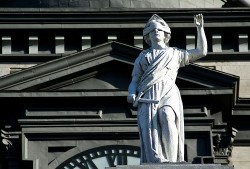 With the stroke of a pen, Ohio judge Patricia Cosgrove made a felon out of Ms. Williams-Bolar, a single black mother with no previous criminal record. Her crime? She dared to send her children to a more affluent (and white) school district that offered them a better education.

Now, the naysayers may disagree that this has anything to do with race. The prosecutor’s theory is that Ms. Williams-Bolar falsified documents pretending that her kids lived with their father in another district so that they could attend a better school and in doing so, cost taxpayers in the school district a considerable amount of money. The judge determined that sending her children to the wrong school was worth $30,500 in tuition!

But it is altogether naive to think Ms. Williams-Bolar is being jailed for improper paperwork. This is a draconian sentence for an infraction where many are never penalized. When other people commit the same infraction, they aren’t investigated – worst case scenario, their children are simply unenrolled . If it was up to Akron, Ohio and Judge Patricia Cosgrove, many parents who make similar mistakes or send their children to better schools would become felons overnight.

It is also hard to believe that the same jury and judge would have found a white woman similarly guilty in a similar situation. It is no mystery that black offenders are more likely to be prosecuted for crimes than their white counterparts and dealt harsher sentences. The fact that the district prosecutor even brought such a case to trial is an indication that fraud is a pretext for racial animus. The message resonating loudly and clearly to African-Americans in Ohio is that their kids can go to school as long as they don’t dare come to the schools that more white kids attend.

We may not all agree that Ms. Williams-Bolar committed a crime but I think everyone can agree that a felony charge for sending her kids to a better school is a bit too harsh. The felony charge on her record would forever prevent her from obtaining teaching credentials in Ohio. We need to stop making criminals out of parents who are invested in the future of their kids.

This case is being covered across Change.org, from Education to Criminal Justice to us here on Human Rights. The court ruling must be appealed and vacated. Ask Governor of Ohio to pardon Ms. Williams-Bolar.