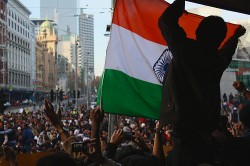 Hundreds of students of Tri-Valley University face the prospect of deportation after a university in California was charged with immigration fraud.

The Tri-Valley University (TVU) in Pleasanton, California, has been charged by immigration authorities with being part of an effort to defraud, misuse visa permits and indulge in money laundering and other crimes. U.S. Immigration and Customs Enforcement department (ICE) allege that while the students were admitted to the university and resided in California on paper, they were working without status in other parts of the country.

The university is said to have 1,555 students, 95 percent of whom are from India. In their defense, the students point out that they believed Tri-Valley was a bona fide and legitimate university as it was registered with the Student and Exchange Visitor Information System (SEVIS), a database of all foreign students in the United States, which is managed by the Department of Homeland Security (DHS).

While Fox News is already disparaging the students as “illegals,” DHS is primarily at fault for not requiring better accreditation from the educational institutions registered with the program. If it was a fake university, DHS should not have issued visas and allowed the institution to dupe so many students. In fact, the situation warrants a lawsuit against both the school and the Department of Homeland Security. As such, the students should not be penalized with deportation from the United States, especially without the right to due process.

Currently, the students from Tri-Valley have their SEVIS information blocked by DHS without which they cannot seek transfers or admissions to other universities and the students are under electronic surveillance. India has already demanded that the students be treated fairly and expressed concern. The Ministry of External Affairs stated that “we have conveyed to the US authorities that the students, most of who are victims themselves, must be treated fairly and reasonably, and that the use of monitors on a group of students, who were detained and later released with monitors in accordance with US laws, is unwarranted and should be removed.”

The Indian embassy in Washington D.C. has launched an email helpline for all Indian students who were duped by the University. Students can email minca@indiagov.org and edu@indiacgny.org to seek guidance from the authorities and to ensure that they are not subjected to any kind of discrimination.

The Tri-Valley students did not violate any laws. They should be allowed to continue their studies at other respectable institutions or return home to India without being placed in deportation proceedings. Ask the State Department and DHS for leniency on behalf of these students who were only aspiring to work hard and pursue their American dreams.