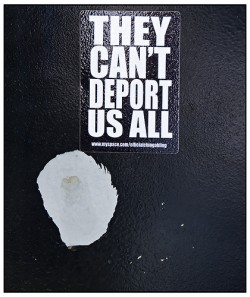 After an arrest in 1995 over a $15 drug deal while he was attending Rutgers University, Farhan Ezad — a legal permanent resident — completed a sentence of probation, graduated with a double major, launched a career, got married, and raised three children.

Farhan never heard about the drug case again until last July when ICE agents conducted a  5 a.m. raid at his home to take him into custody for deportation. He spent a week in federal custody before being released on $10,000 bail to await his March 28 deportation hearing. Now Farhan faces deportation to Pakistan, a country his parents left when he was only five years old.

DHS has stepped up efforts against convicted criminal non-citizens otherwise called criminal aliens. That sounds like a horrifying term, but look closely and you’ll find perfectly legal residents placed in removal proceedings for possessing a couple of marijuana joints some twenty years ago or stealing a tape deck some thirty years ago. They already served the time for their “crimes.” Placing them in deportation now constitutes an act of double jeopardy, further punishment for time they have already served.

Farhan’s wife, Angel, explains it best: “The judge told him when he sentenced him to five years probation for his one and only crime that it was a deportable offense. However, the judge also said that he wasn’t going to deport him for it. So he did not know that at any time he could be deported. My husband moved on with his life as anyone else would have. He was punished for his crime and went on to lead a law-abiding tax-paying life. I have soon-to-be four children who are American that are having their father taken away for something that was already done and over with.”

Mr. Farhan Ezad is an exemplary, law-abiding, and contributing member of society today. In no way does he deserve deportation from the United States for a $15 drug bust that occurred more than 15 years ago. If he had naturalized before the drug bust, he would not be in trouble today.  However, he was 20 at the time and naturalization is probably not the priority for 20-year-old college boys. Additionally, no one could foretell that Congress would pass a heinous law that would be applied retroactively to remove legal permanent residents from this country for minor crimes they committed even before the enactment of the law (this passed the year after Farhan’s offense). It’s not fair to Farhan and it is certainly not fair to his family.

Ask Governor Christie and the New Jersey State Parole Board to pardon Farhan Ezad and expunge his record so he can stay in the United States with his family.