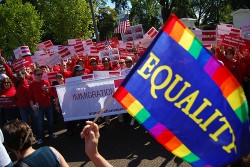 Married same-sex bi-national couples across the United States had only 24 hours to celebrate an announcement by USCIS (U.S. Citizenship and Immigration Services) that the agency would no longer deny green-card applications filed by the couples.

Today, the Obama administration is already backtracking, with USCIS officials telling the media that same-sex couples could go back to being denied a life together in less than a week, contrary to what officials told advocates late last week. Thousands of married couples living together in the United States would again face the prospect of choosing between the person they love and the country they call home.

To be clear, USCIS never agreed to grant green cards. The agency simply agreed to hold the petitions from same-sex bi-national couples in abeyance, putting a hiatus on approval or rejection while the federal stance on same-sex marriage is up in the air.

Due to the Defense of Marriage Act (DOMA), U.S. citizens and legal permanent residents cannot sponsor their spouses for a green card even if their marriage is recognized by the state where they reside, since the federal government controls immigration. Thus, loving couples in long-term relationships are often forced to live apart or completely leave the United States. But a federal district judge struck down Section 3 of Defense of Marriage Act as unconstitutional, stating that DOMA offends state powers over marriage. President Obama and Attorney General Holder have declared that discrimination against LGBT persons should receive strict scrutiny under the Constitution.

In light of these changing interpretations of the law, it is not too much to ask USCIS to hold green-card petitions filed by married same-sex bi-national couples in abeyance until a final legal decision on DOMA. This move would advance justice and fairness for LGBT U.S. citizens and legal permanent residents who are legally married to foreign-born immigrants.

Additionally, holding the petitions in abeyance serves the purposes of judicial economy and efficiency in the immigration system. If USCIS denies petitions now and DOMA is overturned, immigration courts would be clogged with thousands of immigrants who can no longer legally be removed from the country, DHS counsels would face thousands of lawsuits, and USCIS would have to adjudicate all the petitions over again. The abeyance of the same-sex marriage petitions is in the best interest of everyone with a real stake in this matter. Join Out4Immigration in telling USCIS that now is the time to stick by their original decision.