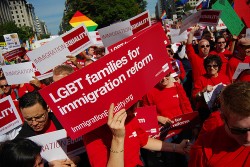 Bi-national same-sex married couples across the country can breathe a huge sigh of relief tonight.

After a long struggle with the law, the United States Citizenship and Immigration Services (USCIS) has confirmed that it will no longer deny green card applications (I-130s) filed by married same-sex binational couples. They will hold them in abeyance till a final decision can be reached on the legal challenge to the Defense of Marriage Act (DOMA). Note that “holding in abeyance” does not mean processing, but it could result in a de facto deferred action.

Chris Geidner from Metro Weekly quotes Christopher Bently, a spokesman for USCIS, confirming the new policy: “USCIS has issued guidance to the field asking that related cases be held in abeyance while awaiting final guidance related to distinct legal issues.”

The guidance effectively acts as a blanket deferred action for married same-sex bi-national couples, who should no longer be subject to removal from the United States. Additionally, pending applicants for green cards are usually eligible for work authorization at no cost by filing a I-765. Eligibility for work authorization confers social security numbers on applicants and, hence, driver’s licenses and other necessary identity documents. Also note that those who entered the country without inspection cannot get any benefits and the guidance is limited to only those couples who are legally married.

Change.org members have taken action to stop the deportation of bi-national same-sex couples on several occasions. Congratulations are in order to the work of Lavi Soloway, the founder of Immigration Equality and the Stop the DOMA Deportations campaign, as well as the advocates from Immigration Equality who have been working with DHS behind-the-scenes to get them to reconsider their policy.

As always, the victory comes with a note of caution. Couples in this situation are advised to get good immigration attorneys before filing any paperwork with the agency. There is always a risk of deportation if the challenge to DOMA fails. But this is a good cause for celebration.