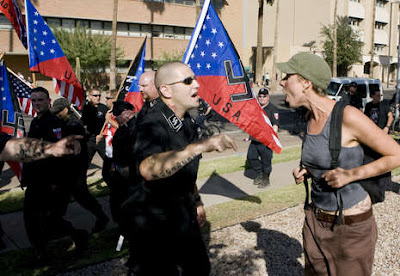 The anti-immigration movement is in complete disarray. While tea-baggers are fighting other tea-baggers, Jim GilChrist from the Minutemen has continued to distance himself from William Gheen, labeling him as someone who is simply in the anti-immigrant business for money.

In growing desperation, William Gheen, founder of anti-immigration organization called Americans for Legal Immigration (ALIPAC), probably thought that the best way to get more publicity and more than a dozen protesters to an anti-immigration rally was to unite with tea-baggers.

Now the Tea Party Patriots, led by former House Republican leader Dick Armey of Texas, don’t really have an official position on the issue of immigration. In fact, Armey has blatantly stated his opposition to anti-immigrant politics noting that it is a divisive issue for the GOP. How does Gheen expect to fit into the picture by driving a wedge into tea-bagging politics?

With tea-bagger rallies against illegal immigration this past weekend, most tea-baggers opted to stay home. Among those who did make an appearance, the numbers were reminiscent of other times that anti-immigrants  tried to hold a rally. Hardly anyone showed up. At a scheduled event in San Francisco, no one showed up.

The best news coverage comes from Minnesota where the anti-immigrant tea-baggers were duped by a protestor going by the name of ‘Robert Erickson’ who pretended to rail against Latinos, while directing his comments towards European invaders. It was not till he had finished speaking and rallying for Columbus to go home that most of the crowd realized the error in giving him the platform. In Fort Lauderdale, nativists attacked pro-immigrant counter-protesters, exchanging a few blows. So much for believing in law and order.

With this level of (dis)organization, anti-immigrant forces need all the luck and support they can get to fight off the coming ‘amnesty.’