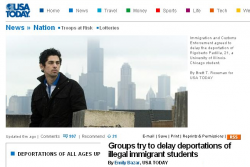 Alas, the largest newspaper in the United States and much of the mainstream media is still on the same old road of calling people ‘illegal.’

Background: On December 15, USA TODAY ran an article titled “Groups try to delay deportations of illegal students,” in which they called young immigrant students in the United States “illegal students.”

What on earth is an ‘illegal student?’

I was taken aback at this relatively new and completely inaccurate terminology and started a petition on Change.org to get the newspaper to retract the statement and re-consider using the word illegal in reference to immigrants. It turns out that USA TODAY has referred to undocumented immigrant youth as “illegal students” before in another article. Well, they would be smart to not do it again.

Today, after more than 500 letters from all of you at Change.org, USA TODAY responded subtly and changed the phrase to “illegal immigrant students,” a reference that is getting pervasive in the mainstream media. New York Times also used this in reference to immigrant youth quite recently. This forces the issue into a longer public education campaign and the need for mainstream media to re-evaluate their policies in referring to undocumented immigrants. They simply fail to grasp the point that no person can be illegal. And we are still waiting on a corrections statement.

At the same time, this subtle change tells us that a few hundred emails and calls have the power to drive change. There should be some solace in knowing that any media source that refers to immigrant students as “illegal students” will have to bear the brunt of young immigrants who simply want the right to define themselves.

Congratulations. But we are just getting started. Picture abhi baaki hai mere dost (Translation: This was just a trailer; the movie hasn’t started yet, my friends).