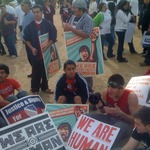 Today, several thousand people from around the country are gathered to protest against the rogue Sheriff Joe Arpaio in Phoenix, Arizona. Estimates vary from anywhere between 5000 to 15000 marchers.

Several protesters and journalists reported brutal cops using tear gas or pepper spray on them, even with kids and elderly people in the march after some sort of altercation. That still does not merit pepper-spraying young non-violent protesters. Children were crying as a result, but the protesters continued marching bravely on their 3 mile path of justice.

In recent days leading up to this event, sixty prominent Black leaders condemned Arpaio in an ad sponsored by Center for Community Change. Reverend Oscar Tillman from the NAACP compared Arpaio to infamous public safety commissioner Eugene Bull Connor, who attacked protesters with water hoses and attack dogs in the 1960s.

Additionally, Detective Alix Olson from the Madison Police Department has called on law enforcement to demand the removal of Sheriff Joe Arpaio, stating that Arpaio was part of the 5% of law enforcement officials who intentionally “disserve and destroy.”

In response to the march, Arpaio has suspended visits at county jails and Tent City officials plan to play loud music to drown out the noise from the protest.

The United States Department of Justice is currently investigating Arpaio for abuse of power and questionable conduct, including allegations of racial discrimination and illegal searches and seizures. While he watches the marchers below from choppers above, what Arpaio might fail to foresee is his reign of terror coming to an end.

If you are just joining, follow the live tweets here. America’s Voice is also live blogging the event while NAKASEC is live streaming.