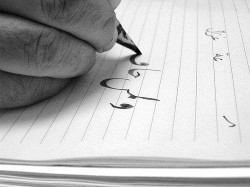 It’s not enough to just look “white” in America to avoid suspicion. One must also refrain from carrying knowledge of languages associated with “terrorism.”

While boarding a flight last year, Pomona College student Nicholas George made a mistake. He never anticipated that carrying Arabic-English flashcards could get him detained and interrogated for hours. But then, we are talking about the Transportation and Security Administration (TSA) here. The convo went like this:

Uh, no. Because I am a white college student trying to study a foreign language that your less-evolved brain cannot process? Or maybe TSA believes that a flashcard with the word “bomb” can blow itself up in the air by virtue of the fact that it is written in Arabic.

The questions were ridiculously stupid and discriminatory. They make as much sense as the TSA asking “do you know who did the Oklahoma City bombing?” It was Timothy McVeigh. And then “do you know what language he spoke?” American English, but let’s not go there.

The FBI did not react any better. At one point during the interrogation, an officer called Nicholas “a fucking idiot.” The compliment should be re-routed to the TSA. Unfortunately, these are not isolated incidents of sheer stupidity. They are part of a larger attempt at creating a security theater while compromising our civil liberties.

George was never informed of his due process rights, including his right to walk away, during the entire five hour interrogation. The American Civil Liberties Union is now suing the TSA, FBI, and police in Philadelphia for violating George’s constitutional right to be free from unreasonable searches and seizures, in addition to infringing on his First Amendment right to freedom of speech.