Home »Immigration»Climate Change Refugees: Let Them In or Let Them Die? 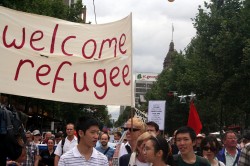 Imagine being forced to leave your home and community due to rising sea-levels as a result of global climate change.

Imagine seeking refuge in one of the countries responsible for global climate change and being thrown into a detention facility for months, sometimes years while awaiting a hearing.

Imagine hearing with the passage of time that your country does not exist anymore.

Imagine that this is actually a reality for many countries in the South Pacific.

An Oxfam report released last year has already identified how climate change is wrecking havoc on Pacific Islanders. Climate change poses a myriad of issues for small island countries including food security, health problems and devastation from natural disasters. Even without the extreme scenario described above, an increase in annual temperatures means poor agricultural and fisheries production while extreme weather events lead to loss of lives and economic output.

Last year, a tsunami in Samoa, Tonga, and American Samoa killed almost 200 people and destroyed dozens of coastal villages, while a mere flooding in Fiji did $54 million in damages. The problem is exacerbated by the fact that island states have their main populations and business centers in coastal areas.

The biggest threat remains one of forced migration, which is already underway for the people of Tuvalu and Kiribati, who have had to leave their countries and subsequently, a huge part of their identities behind. Most smaller atolls will have to face the reality in the coming decades or centuries but will better-situated countries welcome environmental migrants?

A projected 75 million people people in the Asia-Pacific region will be forced to relocate by 2050 if climate change is not addressed. Thus far, countries like Australia and the United States have been unwilling to help or work with Pacific Islanders to address this issue.

But as more people knock on our doors asking for help and a solution to this crisis, we are faced with the option of either letting them in or letting them perish. Their future is in our hands.