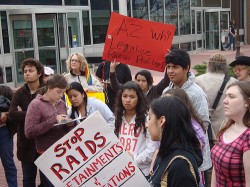 During a naturalization ceremony for members of the United States Armed Services, President Barack Obama came out against the pending Arizona immigration bill, stating that it “threatens to undermine basic notions of fairness that we cherish as Americans.” That is rather nice, coming from a President who believes in immigration enforcement and looked the other way as military-style raids were conducted in Latino neighborhoods a day after the Arizona legislature passed the bill.

Despite Obama’s tacit disapproval of SB1070, it looks like Governor Brewer could care less as several outlets like KTAR reported last night that Brewer will be holding a press conference at 10 am PST, indicating her approval of the bill.

Arizona is a testament to what happens in the absence of federal action on immigration reform. SB 1070 has sparked a much-needed national debate about immigration, with politicians, pundits, news anchors and celebrities chiming in with their opinions. Facing re-election and growing increasingly senile, Senator John McCain says he supports the bill as a “good tool” and “necessary step forward.” Yes, SB1070 is a necessary step forward to an apartheid state ruled by biometrics and regular Joe Schmoes acting like immigration enforcement agents.

The week was marked by protests led by immigrant youth who chained themselves to the Capitol, followed by rallies amassing thousands, and more than 100,000 emails, calls and faxes against SB 1070. Brewer has a Saturday night deadline and even if she does not sign the bill, it would become the law of Arizona.

Last night, Governor Brewer addressed the Chicanos por la Causa and remained quiet on what she would do concerning SB1070. But given that she is rabidly into sending troops to the border, there is little doubt that Brewer would sign the bill.

SB1070 is to Arizona like Proposition 187 is to California. More protests and direct actions will come, but it also looks like a long-drawn out and expensive legal battle to prove the law unconstitutional with the Department of Justice more than likely to get involved.

We can always just give Arizona back to Mexico and let it secede from the union.