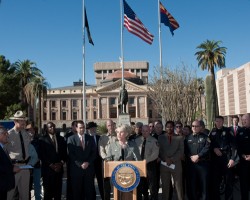 No, I haven’t lost my mind or converted to nativism.

No matter how much it hurt initially, Proposition 8 in California was the best goddamn thing to ever happen to the movement for same-sex marriage. It mobilized millions to take action for same-sex marriage in many other states, brought about new groups and coalitions working for marriage equality, and instigated winning court decisions in several states.

SB1070 — the draconian legislation passed by the Arizona legislature that legalizes racial profiling and directly attacks our civil liberties — holds much promise to do the same for the immigrant rights movement. As a key battleground state for the immigration fight, Arizona has quite the history of anti-immigrant moments ranging from Proposition 300, which banned financial benefits for undocumented students, to Janet Napolitano sending the National Guard to the border, to the first state law in the nation prohibiting businesses from hiring undocumented immigrants. If Brewer signs the bill, it provides a great opportunity for the immigrant rights movement, which is just now waking up to mobilize against it.

Local immigrant rights organizations are getting some much-needed air time, D.C.-based organizations are sending in their version of organizers, many action alerts via email have gone out targeting Brewer, microsites like Alto Arizona have been launched, newspapers are decrying the bill. There is some great energy and momentum, which can only get bigger with Governor Brewer’s signature. Remember, crisis provides opportunity.

Political strategists understand that sometimes we have to lose a battle to win the war. This promises to be one of those battles. Of course, the fact that SB 1070 is probably unconstitutional and would be taken to court might just dampen the movement. But there are many ways to fight for social justice and taking the legal route is just one of them. It should not put a stop to organizing on the ground and in other states.

In the meantime, do continue to sign the petition to Governor Brewer asking her to veto the bill and calling her offices so we can continue building and showing our growing support. Just remember, her signature does not signal an end to our actions, but a beginning of a new moment in the fight for immigrant rights.

We are ready. Bring it on Arizona.