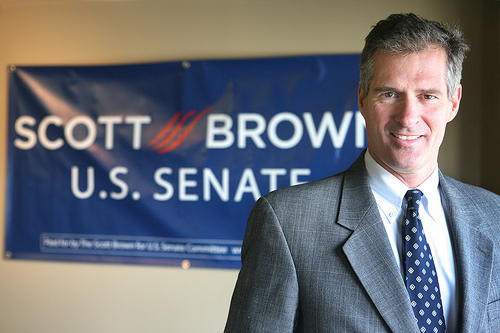 After numerous calls and emails, including a petition started on Change.org that yielded over 300 signatures and a sit-in at his local Boston office, newly-elected GOP Senator Scott Brown from Massachusetts has agreed to meet with an advocate for the DREAM Act.

The new “I love torture” Senator Brown is no Ted Kennedy on immigration issues. With an endorsement from hate-group ALIPAC, Brown has stood staunchly opposed to an immigration reform that creates a pathway to citizenship for undocumented immigrants.

Interestingly, President Lawrence S. Bacow of Tufts University — Brown’s alma matta — just came out in support of the DREAM Act in a letter sent to the Senator. Did this have anything to do with Brown agreeing to a meeting? It is quite possible. Do thank President Bacow here for his support of the legislation.

Still, not everyone is happy. Brown only agreed to meet with a United States citizen advocate and not with the original 5-6 immigrant youth leaders who requested the meeting. Harvard College Act on a Dream, the Student Immigrant Movement, Citizen Orange and other local organizations still want Senator Brown to follow through on the original request and meet with immigrant youth, in order to get a first-hand account of stories from DREAM Act youth. Because when faced with all-American youth who speak English and don’t look like aliens, the DREAM Act becomes a no-brainer.

Maybe that is what Senator Brown is trying to avoid.