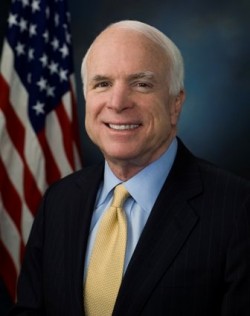 Senator McCain (R-AZ) has rounded up his courage and convictions and deported them South of the border. Even the courage of four undocumented students who put their lives on the line to stand up for their rights is not propelling him to do the right thing on immigration.

Once a champion of the DREAM Act, which would give certain undocumented youth a pathway to citizenship, McCain now wants nothing to do with it. Why? His primary challenger, J.D. Hayworth, is an extremist on immigration issues. But the senator does concede that DREAM Act-eligible students are right: “Their situation is one that they’re in jeopardy. They want to stay in the U.S. They say they can be contributing citizens to our country and I accept everything they say.” The missing words are “I just lack the courage to do the right thing” because “elections have consequences.”

From supporting SB 1070 to saying that undocumented immigrants willingly cause accidents on the road to his danged fence video, Senator McCain has lost his maverick edge on immigration issues. But there are five key reasons why he should show some courage on immigrant rights.

1. Capture and bank that Latino Vote

Senator McCain is smarting from the loss of the Hispanic vote in 2008, where he lost the bloc by 2-1 to President Barack Obama. Instead of rising to the occasion, steering the GOP away from the extreme-right on immigration issues, and proving himself to be the better candidate for Latinos after all, McCain would rather sulk. Yet given the level of disenchantment amongst the Latino voting bloc and the fact that the ethnic group constitutes 30% of the Arizona population, McCain is missing the the golden chance of securing the Latino vote for the GOP. Meanwhile, Somos Republicans — a group of Latino Republicans — point to Colorado as an warning example of a state that turned blue due to Tom Tancredo demonizing immigrants.

2. The issue of “illegal immigration” matters little for his re-election bid.

Arizona Republicans could care less about what McCain thinks about the issue of “illegal immigration” on any given day. He maintains a healthy 30-point lead over Hayworth, with Arizonians more concerned about jobs and the economy. Instead of being on the defensive and letting Hayworth set the agenda, McCain should come out firing and show his ability to lead based on courage and conviction. Even FreedomWorks chairman and tea party strategist Dick Armey has stated, “J.D. had a fairly short, undistinguished congressional career with virtually no initiative on his part. I just don’t see any reason why we should be concerned about that race.”

3. Securing the border is not a necessary prerequisite for the DREAM Act

Senator McCain’s constant claim that “the border needs to be secured” first to pass any sort of immigration reform, including the DREAM Act, makes little sense. The DREAM Act has nothing to do with securing the border. To qualify for the benefit, undocumented youth would need to have maintained five years of continuous presence in the U.S. on the day of enactment. The longer we wait to pass the DREAM Act, the more youth would benefit from it by accruing five years in the country. But McCain is not bothered about time as much as he is about the election date. Given his relative importance to the GOP, Republicans are unlikely to put McCain in a position to cast a tough vote till after his primaries in August.

4. Candidates who flip-flop are not cool and don’t necessarily win elections

McCain was a cosponsor and a champion of the DREAM Act. Instead of running away from his principles, he would be do better by standing with them. Flip-flopping makes John McCain into an easier target for Hayworth to jab at each and every turn.

5. McCain is well-placed to make immigrant rights his legacy

Immigrant rights looks poised to become the civil rights movement of the 21st century and Senator McCain is in a great position to make history books as the Republican who stood up against right-wing extremism and guided not just the GOP, but the entire country, in the right direction, especially after the passion of immigrant rights champion Ted Kennedy.

Meanwhile, DREAM Act advocates should focus their efforts elsewhere, since it doesn’t look like Senator McCain is about to do an I-601 waiver to bring back his courage anytime soon.