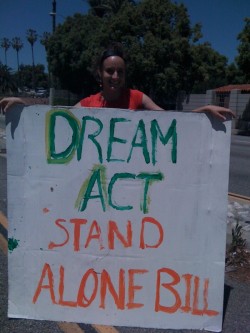 The DREAM Act has arrived. Propelled by sincere efforts of civil disobedience, Dream Activists around the country are articulating a new, refreshing, and powerful movement for immigrant rights. And they want the passage of a standalone DREAM Act today.

The federal DREAM Act would provide certain undocumented students, who were brought to the United States by their parents and have continuously resided in this country from a young age, conditional residency and a pathway to citizenship, provided they finish high school or earn a GED, and go on to college or the military.

Many immigrant rights and comprehensive immigration reform supporters are confused as to why undocumented students are taking grave risks for such a narrow ask. Here are eight reasons why the immediate passage of the DREAM Act makes complete sense:

1. The DREAM Act is the most popular and passable piece of pro-immigration legislation.

With 38 cosponsors in the Senate and 119 in the House, the DREAM Act enjoys not only the most support of any immigration legislation, but also bipartisan support. Even President Obama once said that the DREAM Act is “something that we can do immediately,” while many in the Obama Administration — from DHS Secretary Janet Napolitano to Secretary of Education Arne Duncan to the Pentagon — support the DREAM Act as the only immigration legislation that can pass this year.

2. There is little reason to couple the DREAM Act with the politics of immigration reform.

The main sponsor of the DREAM Act, Senator Richard Durbin (D-IL), recently appealed: “We can save the big debate for comprehensive immigration reform. I support it. But I hope they will believe and join me in this one part of it to say that we won’t penalize the children for this contentious, divisive political debate on immigration.” No youth should be barred from pursuing their dreams if they are willing to work hard. That is the basis of the DREAM Act. Each year it doesn’t pass, another estimated 70,000 undocumented students graduate from high school with little hope for higher education. Ten years adds up to a lost generation.

3. Advancing the DREAM Act breaks the current logjam in Congress and serves as a litmus test.

Dreamers (those eligible for the benefits of the DREAM Act) are tired of the finger-pointing in Congress. One week, White House Chief of Staff Rahm Emmanuel is to blame while another week, Senator Lindsey Graham (R-N.C.) is throwing a tantrum. But the DREAM Act has support across party lines and it can be the starting point of discussion and even the litmus test for other reform.

4. Immigrant communities need a victory and the DREAM Act promises to deliver it.

In the wake of the anti-immigrant SB 1070 and ban of ethnic studies in Arizona, the tragic loss of promising undocumented youth leaders such as Tam Tran and Cinthya Felix, and the rapid-fire spread of legislation that criminalizes immigrants, the DREAM Act can deliver a much-needed and inspiring victory that uplifts morale and brings positive change to our communities. While advocates who bundled the DREAM Act with comprehensive immigration reform fear that letting it pass as a standalone would weaken the broader bill, it would in reality be a positive shift from the decade-long failure of pursuing a comprehensive strategy.

5. Some versions of the proposed CIR framework look almost like SB 1070 on a national level.

The latest proposal for comprehensive immigration reform refuses to implement a legalization program till certain benchmarks are met, such as an increase in border control, surveillance programs, border patrol, and ICE agents, constructing a Fortress America to keep immigrants out. We need to pass legislation to raise mass consciousness for immigrant rights; create a new dialogue that appreciates the contributions of all immigrants; deconstruct myths that demonize immigrants; and not go along with enforcement-heavy, immigrant-unfriendly proposals that fail to energize our communities.

6. The DREAM Act energizes the grassroots unlike any other proposal for immigration reform.

The movement of undocumented youth demanding the passage of the DREAM Act comes from the autonomous grassroots. Many support the DREAM Act as a great incentive for thousands of young people of color to finish high school, attend college, and eventually earn citizenship. The legislation has inspired undocumented youth to speak out freely and openly, launching active and unrelenting pro-immigrant student groups in almost every state. The civil disobedience actions carried out by undocumented youth in Arizona sparked solidarity sit-ins, sit-downs, and hunger strikes.

7. Passing the DREAM Act would strengthen the movement for other much-needed legislation.

The DREAM Act would legalize several hundred thousand youth who could advocate publicly for their undocumented families and communities. After all, most undocumented youth have family members who are also undocumented, so the need for a comprehensive solution is not about to go away. Passing the DREAM Act now would embolden undocumented immigrant youth to come out and fight for real grassroots immigration reform.

8. Advancing the DREAM Act should teach people about the many ways in which the system does not work, especially for young people.

Most American citizens think that getting legal status is as simple as getting in line. Try telling that to an undocumented youth who waited in line for over 20 years only to “age-out” upon turning 21 and told to go to the back of the line and wait another 15 years (Matter of Wang). It makes little sense, but it happens in thousands of cases: once an immigrant youth turns 21, s/he is no longer considered an immediate relative of her parents and siblings. And once someone is out of status in this country, s/he cannot simply adjust status. For many who want to gain legal residency, the DREAM Act is the only answer that makes sense.