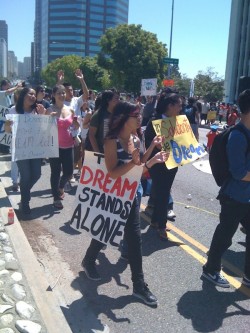 Rumor has it that the Los Angeles Police Department shut down Wilshire Boulevard at Federal building earlier today in order to defuse a bomb.

We’ll take that as a compliment. The rumored jihadis were in reality none other than DREAM Act youth and supporters, conducting another peaceful civil disobedience action in solidarity with the DREAM Act Five: a sit-down at the Federal building to ask Senator Feinstein to get the federal DREAM Act out of the Judiciary Committee and push it as a stand-alone bill.

The DREAM Act would grant a path to citizenship for undocumented youth who arrive in the country as minors and pursue higher education.

Nine young people — all citizens of the United States — were eventually arrested after the peaceful sit-down that lasted two hours and made history: Wilshire has not been shut down in this manner before and it actually trended on Twitter.

“I am upholding the legacy of the civil rights movement when many people were denied their human rights, one being the right to an education. I will ensure the passage of the DREAM Act as a stand alone bill,” said Charlene Gomez, one of the citizen allies who was arrested and later released.

Alma, an undocumented student, reasoned with a few angry drivers who could not see why someone would shut down traffic to gain support for their cause, “Don’t be angry that your time has been disrupted for a little bit this morning. Our entire lives are disrupted because Congress has failed to take action on the DREAM Act.”

The California Highway Patrol and LAPD eventually cleared the vehicles out and shut down the intersection, but not before one driver got out of his car and joined the DREAM Act supporters for the rally; others honked in support of the cause. The drivers were finally able to go about their day, but undocumented students are still living in limbo.

We have to go to UCLA Labor Center tonight for a banquet. Matias Ramos, a board member of the United We DREAM network, who was at the civil disobedience action tells me “now we can’t complain about the traffic.”

Today’s action was part of a national campaign in support of a standalone DREAM Act. Solidarity actions were also held in Seattle, Houston and Phoenix.