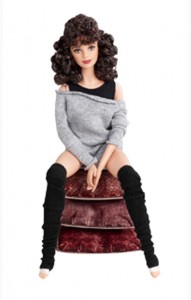 When Mattel first announced that it was releasing an “Alex Owens” Barbie to celebrate the iconic Flashdance figure from the 1980s, fans were excited to finally own a “piece” of Jennifer Beals, who played Owens in the hit movie.

But when Mattel finally unveiled the doll, it appears the company had forgotten one key fact: Flashdance star Beals is bi-racial — half Irish and half African-American. Over the years, Beals has regularly refused to dismiss any part of her identity, and even insisted on playing a bi-racial character in her hit TV show, The L Word. But the Barbie that Mattel released in her honor looks a tad bit fairer than Beals, erasing her part of her heritage.

In Flashdance, Owens is a female welder who aspires to master the classical art of ballet. Critics dismissed the plot as fantasy, but the audience responded with lavish praise, making her a pop-culture icon.

Actually, the real fantasy here is her Mattel representation. If the Barbie doll was a real person, she would be 6′ 0″, weigh 100 lbs. and wear a size 4. Her measurements would be 39″/19″/33.” It’s probably impossible to find someone who lives up to these statistics, and yet this is the model that young girls look at every day.

Take a look at the “Cinco de Mayo” Barbie that was supposed to represent Mexico as part of Mattel’s “Festivals of the World” series. If Mattel had done some research prior to releasing that doll, the company would have realized that Cinco de Mayo is more of a U.S. celebration than it is a Mexican one.

This latest irresponsible move by Mattel is just another indication that the company could care less about being truly representative when it comes to matters of racial and ethnic identity. So far, Jennifer Beals has not yet commented on this particular whitewashing of her identity. But one thing’s for sure: her fans are unimpressed.