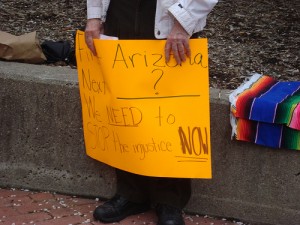 GOP candidate Dan Fanelli is hoping to take on Democrat Representative Alan Grayson for Florida’s 8th District. And his apparent plan of attack is to launch television ads calling for racial profiling of people with darker skin color.

“Does this look like a terrorist?” Fanelli asks in the political ad featured below, gesturing towards an older white man. Then, pointing to the darker-skinned young man, he adds: “Or this?”

I don’t know who looks like a terrorist, but Fanelli does appear to be pretty smarmy. Funny, isn’t Fanelli an Italian name, and not long ago, weren’t Italian-Americans getting put in concentration camps in the name of national security?

Not only does the GOP candidate promote the use of racial profiling as public policy, Fanelli actually declared in an interview that people from countries like Iran, Iraq, Pakistan, Saudi Arabia and Syria should be happy to submit to extra U.S. scrutiny for their own safety.

Yes, Fanelli, we tried that already. It was called the National Security Entry-Exit Registration System (NSEERS), a special registration post-9-11 program that required male visitors from 24 Arab and Muslim countries and North Korea to register with local immigration offices. Over 83,000 people registered and 1,200 were arbitrarily detained without due process. And it did not result in a single terrorism conviction.

I do agree with Fanelli that political correctness is inconveniencing us. It’s easier to label just Arab-Americans as terrorists, instead of accurately using the term to describe all acts of terror, no matter who commits them. Which is why we see officials and certain pundits who are quick to label certain dissident groups as “terrorist,” but not others. How convenient.

A closer examination of U.S. political climate would reveal that it isn’t people of color who’ve been talking about overthrowing the government or driving planes into buildings lately. That would be the tea baggers and Joseph Stack — that is, mostly white people who aren’t getting profiled as a threat to the national security of the United States.

Unfortunately, Fanelli is not a lone, looney voice. After all, a majority of Americans think that the new draconian Arizona law that encourages racial profiling is just “about right.” So as outrageous as the ad is, maybe Fanelli is helping us — by exposing how deeply attitudes about race are rooted in mainstream America.