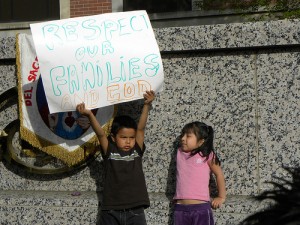 The architect of SB 1070 is now training police officers in Arizona on how to conduct racial profiling, using the pretext of “reasonable suspicion.”

Unlike probable cause, “reasonable suspicion” is a legal term that permits police misconduct based on a “totality of circumstances.” In the following video, Kris Kobach launches into some of the factors local law enforcement can use to identify undocumented immigrants, which he says are mostly common sense (see video below).

Let’s deconstruct some of these points. First, “the individual has no English skills or speaks English poorly and does not comprehend English instructions” sounds precisely like my grandmother (a U.S. citizen) and many individuals who live and thrive in parts of the United States where no English is spoken.

And international students and foreign-born tourists definitely better stay away from Arizona, given how whether an “individual has no identification or a foreign ID card” is now grounds for reasonable suspicion that such a person is undocumented.

The advice that cops should be on the lookout for any individual who “appears to be in transit or traveled a significant distance” also provides us with yet another warning: Apparently, no people of color should go on road trips or drive through Arizona.

Additionally, if they want to try, they should be a highly alert driver and never forget to take an exit, since “evasive maneuvers taken by the driver of a vehicle, such as abruptly exiting from the highway” are also grounds for reasonable suspicion.

You should also avoid driving with your family and friends, given how an overcrowded vehicle also offers law enforcement signs about an individual’s immigration status. AltoArizona, for example, has a great blog entry on how a Mexican-American family driving through Arizona can be pulled over and profiled due to the “totality of circumstances.”

His fifth piece of advice is interesting, too: police should note if an individual’s appearance is “out of place or unusual in a specific locale.” Similar to when black men are caught driving nice cars in good, predominantly white neighborhoods, Latinos should not live beyond their perceived means and be found in “good white neighborhoods” in Arizona.

And considering the “totality of circumstances,” his #18 piece of advice is especially noteworthy, providing even more grounds for racial profiling: “Indications from dress, appearance and demeanor that the person is an ‘illegal alien’ from the experience of the officer.” Not withstanding undocumented shoes and undocumented clothes, if an officer’s experience suggested that Latinos were usually undocumented, then that alone would be enough to serve as “reasonable suspicion” and allow him or her to demand papers.

Maybe what Kobach really means is that “common sense” is a pretext for racial profiling.