Home »Immigration»Rep. Lamar Smith Has a Nightmare on the DREAM Act 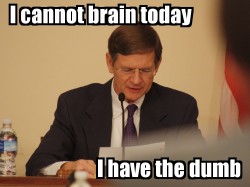 Someone left an idiot running loose on the hill.

After a great op-ed by Senator Richard Durbin (D-IL) in support of the DREAM Act, Rep. Lamar Smith from Texas (R-21) came out guns blazing against the legislation on The Hill’s Congress Blog. It’s too bad he repeatedly missed the target, resorting to distortion and blatant lies.

First, Rep. Smith distorts the picture by bringing up in-state tuition. But the proposed legislation does not require universities to give undocumented students in-state tuition because residency determination is a state prerogative. Smith goes a step further with his distortion by saying that parents who send their kids to out-of-state schools would have to pay a higher tuition bill than undocumented immigrants, leaving out the fact that everyone — regardless of citizenship — pays a higher tuition bill for going to public universities outside their established state of residency.

Next, the Texas representative brings up the prospect of DREAM-eligible students taking up limited spaces at universities that should go to American (citizen) students, even though undocumented students represent less than two percent of high school graduates and there is no evidence of any displacement. Smith believes American citizen students are so unintelligent and unequipped to compete with a few undocumented youth that they need affirmative action. Smith, who supports American students so much he has consistently voted against student interests and has a 17% rating of from the National Education Association.

Appalled advocates are calling on Republican co-sponsors of the DREAM Act, such as Representative Lincoln Diaz-Balart, to counter the blog on the Hill.

The distortions are not over. Rep. Smith claims that the DREAM Act grants “amnesty” to undocumented immigrants regardless of their age, but the Senate version of the DREAM Act has an age limit of 35 and the House version would likely adopt this if the bill ever came up for discussion. Then he attacks the requirements, saying that immigrant youth would just commit fraud to qualify. Is the system so weak and regressive that officials cannot verify college and military records?

Smith is also afraid that requirements for the DREAM Act can be waived by showing “hardship.” In fact, an applicant must show an inability to complete provisions, retain good moral character standards, and demonstrate “exceptional and extremely unusual hardship” to a spouse, parent, or child who is a citizen or legal resident of the United States in order to merit any exceptions.

Finally, Smith and his staffers bring up the prospect of chain amnesty under the DREAM Act, claiming that once undocumented students are 21, they can sponsor their parents. What they omit is that if the parent has accrued illegal presence in the United States without the protection of the LIFE Act, they would need to go back to their country of origin and wait more than 10 years to rejoin their adult children.

The DREAM Act is a nightmare, but not for the American people. It’s a nightmare for politicians like Rep. Lamar Smith who fear the prospect of hundreds of thousands of young people of color getting an education, paying taxes to keep social security solvent, climbing the social ladder, and voting them out of office.

But here’s something heartening: Smith proves that the only way to counter the DREAM Act is to spread lies and propagate misinformation about it. Otherwise, the legislation is a no-brainer.

There’s one point of agreement with Rep. Smith: that “citizenship is the greatest honor our country can bestow and should not be given away lightly.” Since he seems to take the honor for granted, when can we start stripping politicians like Lamar Smith of their citizenship?

Maybe Smith should fire his staffers and hire some DREAM Act students, who can probably research and write better than the atrocious blog we were subjected to from an American lawmaker.