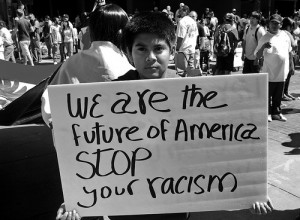 Since its inception, Arizona’s anti-immigrant law has launched heated discussions about racism and racial profiling in a way that we haven’t seen on the (inter)national stage since the OJ Simpson trial. Advocates of Arizona’s SB 1070 are busy defending themselves against accusations of racism, while protesters are chanting “no justice no peace, no racist police” out in the streets. Even the United Nations has stepped in, stating that SB 1070 marks a “disturbing legal pattern hostile to ethnic minorities and immigrants.”

But what if it’s not just about race? As investigative journalist Greg Palast — who exposed black voter purges in Florida during the 2000 Presidential elections — argues, the issue of race in many ways is just a smokescreen (for more, check out the video below the jump) for what’s really going on.

SB 1070 serves to dissuade people of color — even legal immigrants — from electoral participation by creating a climate of fear and intimidation. As Palast observes, the “vast majority of perfectly legal voters and residents who lack ID sufficient for [them] are citizens of color, citizens of poverty.” It’s a bloc that, not incidentally, votes heavily Democratic — making SB 1070 just one of many moves by Republicans to prevent Latinos from voting, (known as the “Great Brown-Out”).

These claims do not come without backing. When she was Secretary of State, current Governor Jan Brewer purged over 100,000 eligible legal resident Latinos from the voting rolls. She also declared one in 3 Phoenix residents ineligible to vote, using another law called “Proposition 200” that required proof of citizenship to vote. But as a prosecutor found later, the people who were actually being kept off the rolls weren’t “illegal voters” or criminals. (That same prosecutor was subsequently fired for refusing to fabricate charges of illegal voting among immigrants.)

Leave it to State Senator Russell Pearce, the Republican sponsor of the latest attempt to prevent Latinos from voting, to give away the real reason he’s backing SB 1070. According to Pearce, “There is a massive effort under way to register illegal aliens in this country.”

Yet there’s not a single shred of evidence to prove such a point. And it’s no coincidence, either, that SB1070’s architect and legal mind, Kris Kobach, also engaged in illegal voter caging when he was the Kansas GOP Chair, using technicalities to block minorities from casting their votes. (And guess what? Kobach’s now running for Secretary of State in Kansas, where he’d once again have the authority to eliminate more minority voters from the rolls.)

Undoubtedly, SB 1070 and the subsequently passed bill to ban ethnic studies in Arizona are ideologically motivated and racially tinged. These are efforts to not just purge Latinos from the voting booth, but to eliminate the cultural lineage and history of the state that was once part of Mexico. But maybe Greg Palast has a point. The target is not precisely brown, but may be Democratic blue.