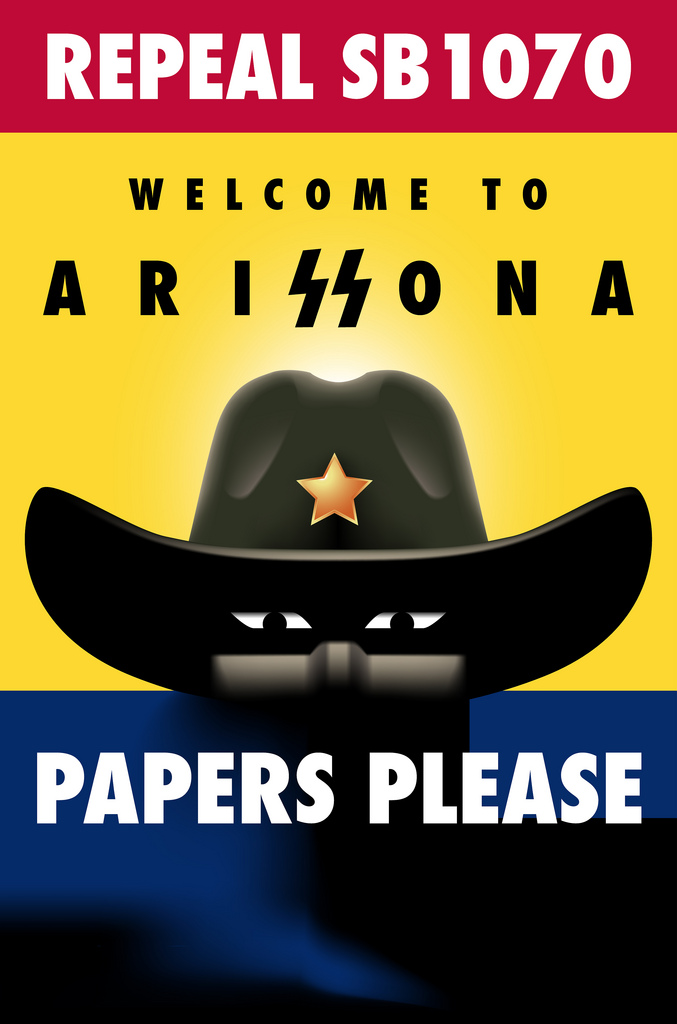 I was sent to Arizona this Mother’s Day weekend to join the delegation of national feminist leaders, journalists, and organizers from the National Day Laborer Organizing Network, the National Domestic Worker Alliance, and Jobs with Justice to document the experiences of women in Arizona in the wake of SB 1070. We sought to bear witness to the brutal impacts of SB 1070 on women and children in Arizona as well as the threat of similar laws nationally.

The testimonies we heard makes clear in vivid and haunting detail that SB 1070 constitutes a violation of principles we hold dear to ensure the protection of women as mothers, workers and leaders in our families and communities. The draconian legislation has paved the way for assaults on the basic human rights of women who came here simply to support their families, and created an environment in which violence against women and children — physical, spiritual and legal — has been state-sanctioned.

The legislation has implications for women nationally. Laws like SB 1070 are being considered in about a dozen states, and policies promoting local law enforcement of immigration policies are already in effect in localities around the country. This is a crucial moment to turn the tide on enforcement-based immigration policies and therefore to create a safer climate for not just immigrant women but all women.

Here are some reasons to oppose SB 1070, with first-person narratives from our fact-finding mission in Arizona.

“I never knew this could happen,” said Catherine, age 9 and a U.S. citizen. Both of her parents were arrested in a workplace raid. Over 100,000 parents of United States citizens like Catherine were deported in the past 10 years. Few think about the implication of that staggering statistic on children who are forced to live without their families, on parents who are separated from their children.

9. These acts rob women of the right to support their loved ones.

“We come here to work and all the time we were just trying to survive,” said Sandra, Catherine’s mother. “But we have to live closed in fear.” Even those who have been on the job for a long time face increased incidents of workplace harassment. Benita, a public worker for 23 years, told us, “They give me more things to do because of my color; they’re always telling me to do something about my accent.”

8. These acts force women to live with physical and sexual violence

Sylvia told us the undocumented parents she works with would not report a sexual assault for fear of being deported. One woman put it this way: “If the law goes through, I don’t think any woman will ever call the police again. It will be chaos. It will be terrible.” This is in direct contradiction with federal immigration benefits such as the U visa, which allows undocumented victims of violence in the United States to come forward and get legalization based on their cooperation with law enforcement.

7. These acts subject women to humiliation and violence from enforcement agents.

Alejandra suffered a broken jaw when she was detained and then was denied medical care, despite her repeated cries for medical attention, and suffers ongoing problems as a result. We learned that Laura and many others were refused the most basic sanitary supplies.

6. These acts scar children and force some to parent their younger siblings.

We heard from children who watched in horror as a parent was arrested, or came home to an empty house to get a call from immigration. We learned of children who draw pictures of living in a house in a cage. “It’s not like a wound that just heals,” Esperanza told us. “They’re damaging our soul. The scars will be there forever.”

We met a brilliant DREAM Act eligible student accepted to a graduate program at Harvard and promised financial aid by a group of supporters here, who are now afraid that due to SB 1070, they could be jailed for providing this help. Other teenagers have dropped out of school in order to earn income lost with a parent’s detention while some do not see the point of high school if they cannot see a pathway to higher education.

4. These acts instill terror of those who should be protectors.

Mary Rose Garrido Wilcox from the Board of Supervisors told us she had to ask Sheriff Joe Arpaio’s office not to send representatives to the annual baseball outing for students. “The kids are so afraid of those brown shirts,” she said, “they won’t come if the sheriffs are there.” Besides law enforcement, some have expressed that the legislation might even deter people from seeking the help of clergy.

3. These acts create fear of doing the most basic activities simply because of the color of one’s skin.

Carrie said she often gives people rides to the doctor or the store. “Since SB 1070 was signed,” she told us, “a lot of people haven’t been coming out, even to get free food. They’re afraid to leave their homes.”

2. These acts increase crime and wrong-doing

One of the most insidious side effects of SB 1070 is that it breeds a culture of impunity for those who exploit and abuse immigrants by discouraging immigrants from reporting crimes to local law enforcement. SB 1070 gives a free pass to actual criminals to attack undocumented immigrants and those who could be perceived as undocumented, thus increasing crime.

1. These acts are unconstitutional and provide no solution to broken immigration system

The system is undoubtedly broken when it takes more than 20 years for families to unite, when adult children are not considered immediate relatives of their own parents and siblings, when most people in detention and removal proceedings have no criminal records. SB 1070 is a misguided and unconstitutional step in the wrong direction of framing immigrants as criminals. Additionally, it does nothing to “secure the borders” of Arizona and impedes on federal powers to enforce immigration laws.

We must oppose SB 1070 from not just the immigrant rights and feminist perspective, but because it is essentially about human rights and what kind of country we want to reside in — one based on hatred of those who seem different from us or one based in a celebration of diversity. The answer is crystal-clear.

Litigation may not resolve this issue in due time, but an Executive Order from Obama to nullify laws like SB 1070 and rescind 287 (g) programs, which allow local police to act like immigration officials, is something that can be done immediately.