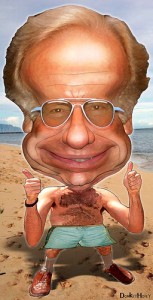 America is vulnerable and under attack. From Senator Joe Liberman, that is. In response to the attempted Times Square bombing allegedly perpetrated by a Pakistani-born naturalized American citizen (read: brown-skinned person), Lieberman is pushing a bill to hack away at the U.S. Constitution. It does so by stripping citizenship from naturalized Americans who are affiliated with foreign terrorist organizations.

But domestic terrorists like the Ku Klux Klan and people who bomb abortion clinics can keep their citizenship.

What is Lieberman drinking nowadays? Why, some TEA of course, since the bill is informally being called the “Terrorist Expatriation Act.” Senator Brown is a joint co-sponsor of the bill. Wasn’t he one of the GOP hopefuls that President Obama is calling on for support on a comprehensive immigration reform bill? Yes, consider that moment part of history now.

The TEA Act, which I’ll refer to from here on out as the “Brown Citizen Terror Act,” is clearly unconstitutional, given that the Fourteenth Amendment confers citizenship on “all persons born or naturalized in the United States…” without exceptions. Even the Supreme Court has ruled that “Congress has no power under the Constitution to divest a person of his United States citizenship absent his voluntary renunciation thereof.”

However, these jaw-dropping statements calling for revoked citizenships aren’t coming from Joe “We Must Go to War” Lieberman alone. Secretary of State Clinton also says citizenship is a privilege, not a right, and that the State Department already has expatriation authority within U.S. law to strip naturalized citizens of their rights — that is, “if someone shows some kind of allegiance to a foreign state.” Some kind of allegiance?!

That’s not all. House Speaker Nancy Pelosi says that she likes the spirit of the proposal, stopping just shy an endorsement of the bill.

Is this why MoveOn is sending me emails about saving the soul of the Democratic Party? I think I  hear the spirits of the “Founding Fathers” wailing pretty loudly. Why don’t we see these kinds of histrionics when white male citizens like Timothy McVeigh and Joseph Stack actually succeed in killing people and destroying buildings?

Meanwhile, President Obama is getting gung-ho about killing a U.S. citizen who has suspected ties to al-Qaeda, and also making jokes about predator drones.

Nine years of fear-mongering has created a new class of cowards who would rather attack the fabric of the U.S. Constitution — our civil rights and liberties — than actually take effective measures to protect this country. Stripping people of their naturalized citizenship does nothing to prevent future attacks. Abandoning civil rights and liberties in reaction to an attempted attack is an act of surrender and defeat.

We’ve certainly made progress for racial relations in America. Nowadays, it only takes an attempted bombing, allegedly orchestrated by a person of color, to bring America’s belief in its founding ideals crashing down.