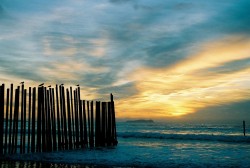 esterday was “Who Wants to Shoot More Mexicans Day” in the United States Senate.

The BP oil spill in the Gulf of Mexico is reportedly the worst oil spill in American history and threatens to devastate wildlife and fisheries in the area. For a while, the United States Congress and the White House simply did not treat it as an national emergency.

No, instead of prioritizing the oil spill, President Obama deployed 1200 troops to the border and requested $550 million for law enforcement efforts to keep undocumented immigrants out of the United States. After all, Mexicans and Central Americans spilling across the border in large numbers (a mythical imagery purported by the fear of the Other) to come work in the United States is a bigger crisis to avert than the spilling of some 19 million gallons of oil in the Gulf of Mexico.

Senator Kyl, joined by McCain, made it a trio by requesting $200 million more for law enforcement initiatives to address illegal border crossings. Finally, Senator Demint crashed the party with an amendment to complete the 700-mile border-fence along the U.S.-Mexico border. All four amendments were rejected.

If we were to psychoanalyze this, it is clear that a large segment of Congress along with President Obama have some major avoidance issues. There is a need to move forward with constructive solutions to immigration problems, but constructing a fence and sending the National Guard to the border is not the solution. The lone voice of reason comes from Senator Robert Menendez (D-NJ), who criticized both Obama and McCain for buckling to right-wing Republicans on immigration reform.