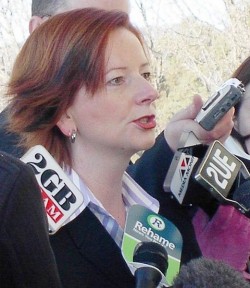 Gillard, a Welsh-born former union lawyer serving as the deputy PM under Rudd, was finally goaded into challenging Rudd for his position after a persistent drop in support for the former Prime Minister.

Her victory is being heralded by feminists as an inspirational win for women across the world. While there is an ongoing debate over whether having more women in positions of power makes a difference in the lives of ordinary women, there is no doubt that Julia Gillard is an immigrant success story.

Gillard is the second youngest of seven siblings hailing from an impoverished family in Wales who immigrated to Australia in pursuit of a better life. The father of the Australian PM recounts how Gillard was quite a sickly child who suffered recurring chest infections and their move to Australia only came about because due to the cold environment in Wales, Gillard could have developed pneumonia, thereby never reaching her full academic and professional potential.

Today, she has crashed the glass ceiling to become one of the most powerful women in the world, and her immigrant parents certainly deserve credit for her success.

The fact that Gillard is a white woman made it easier for her to integrate into Australian life and politics. Despite her immigrant background, Gillard is not a fan of “big Australia” and looks likely to reverse immigration policies in order to rein in population growth. Lately, Australia has not earned points for its treatment of Indian immigrant students and it would be interesting to see how Gillard’s brand of restrictionism affects Australia’s immigrant landscape.

Ironically, it is dirt poverty in Europe that encouraged the migration of thousands to Australia. The new immigrants proceeded to exterminate and drive the indigenous Aborigines off their lands and into reservations, repeating the story of America and American Indians down under.