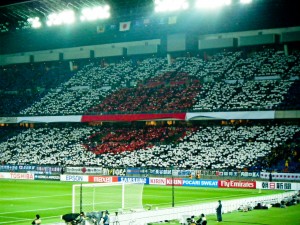 Given the phenomenal performance of South America’s teams, World Cup soccer fans from across the Americas are proudly calling the Copa America the biggest sporting event around. Meanwhile across the Atlantic, though Ghana was the only African team to make it into the second round, across the continent, enthusiastic support for the team is evident.

But when it comes to Asian teams playing in the World Cup, that same kind of pan-ethnic solidarity has been strangely missing — even when Japan scored a surprise victory over Denmark to advance to the competition’s final stages.

What accounts for this lack of solidarity? To understand this phenomenon, we have to start with the history of pan-Asianism.

The idea of pan-Asian solidarity has its roots in the pre-World War II era, when Japan tried to unite Asian nations against European imperialism (a move that’s often dismissed as a propaganda effort used to justify Japan’s own imperialism). In later years during the Cold War, Indian Prime Minister Jawaharlal Nehru tried to define a “third way” for Asian countries — a way to avoid picking sides in the aggressive U.S.-Soviet divide. More recently, over the past few decades, leaders from several countries in the Asian continent have tried (unsuccessfully) to put forward an Asian monetary unit much like the Euro.

What accounts for the lack of success behind such efforts? Scholars such as Prasenjit Duara argue that because of Asia’s geographic size, its residents haven’t developed a strong pan-Asian identity. Likewise, regional rivalries and memories of invasions by neighboring countries each prevent solidarity across borders. All of which explains why a pan-ethnic Asian identity such as “Asian-American” is far more likely to develop in the United States than Asia.

In the United States, policies that discriminated against Asians such as the Chinese Exclusion Act of 1882 and the Japanese-American internment helped a pan-Asian alliance develop during the civil rights movement. Common discrimination brought communities together under the banner of Asian-American and even Asian-American and Pacific Islander (AAPI) identity.

Recent political upheavals and natural disasters such as the 2004 tsunami may have helped bring together different Asian communities. Likewise, Asian-American civil rights organizations in the United States have continued to unite — for example, by recently branding themselves as an alliance under the “Asian American Center for Advancing Justice.” Still, though, it’s unclear whether political alliances are also helping to create and foster cultural ones.