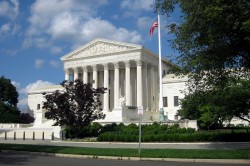 In what promises to be a historic decision, the U.S. Supreme Court has agreed to consider a challenge to a 2007 Arizona immigration law that sanctions businesses who knowingly hire undocumented workers. Chamber of Commerce of the United States v. Candelaria marks the first time the Supreme Court has agreed to hear and decide on the constitutionality of a growing number of state and local anti-immigrant laws.

A little background is in order. In 2007, Arizona passed the Legal Arizona Workers Act, which allows superior courts in Arizona to suspend or revoke the business licenses of employers who knowingly or intentionally hire unauthorized immigrants. An alliance of business owners, civil-rights lawyers and immigrant-rights groups filed a lawsuit immediately afterward, arguing that the law expressly violated a federal statute that “preempt[s] any State or local law imposing civil or criminal sanctions (other than through licensing and similar laws) upon those who employ, or recruit or refer for a fee for employment, unauthorized aliens.” 8 U.S.C. § 1324a(h)(2).

A federal district judge and then the Ninth Circuit Court of Appeals disagreed with the plaintiffs, stating that the Arizona law neither preempted federal law nor violated due process because it was a licensing law.

Joining forces with the American Civil Liberties Union and other immigration groups, the United States Department of Justice filed a brief arguing that the Arizona immigration law violated the Supremacy clause of the Constitution, which grants the federal government exclusive power over enforcing immigration laws.

(Rumor mills are saying that the Department of Justice is filing another injunction soon to prevent the implementation of SB 1070, the Arizona law that criminalizes undocumented immigrants and allows racial profiling by local law enforcement).

Given the flurry of state laws and local ordinances against undocumented immigrants, the judiciary may provide the leadership missing from Congress. However, any ruling on whether states can make laws regarding immigration only settles constitutional questions and not the actual merits of the employer sanctions law.

Sanctions for hiring unauthorized workers were first created at the federal level when Congress passed Immigration Reform and Control Act (IRCA) in 1986. “Employer sanctions” is a misnomer because immigrant workers are the ones who actually bear the brunt of enforcement. The approach fails to nail the real crooks: corporate interests who pit workers against one another based on immigration status in a race to the bottom. Hiring workers illegally is hardly ever penalized and even worksite enforcement under the current White House has hurt workers.

Employer-sanctions are also detrimental to American-born and legal resident workers since they encourage undocumented workers to remain in the shadows and suffer at the hands of unscrupulous employers who are given more liberty to exploit them. In fact, undocumented workers are actually protecting American jobs instead of stealing them. Without the cheap supply of labor, labor-intensive production would move offshore, leading to more job losses for Americans.

The solution is greater labor protections for all workers regardless of immigration status. Yet thus far, Congress has moved in the direction of enforcement-only directives like employer sanctions, while individual states keep stripping undocumented workers of legal protections like workers’ compensation. If employers were required to pay fair wages and guarantee safe working conditions for all with stiff penalties for outsourcing jobs, they would have little incentive to employ cheap labor and maybe the 9.7% of unemployed workers could find jobs.