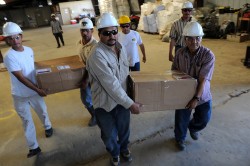 Instead of immediately pursuing criminal charges and sanctions against BP for an oil spill that threatens the lives of millions of species, destroying marine ecosystems and coastal livelihoods, and accruing billions in cleanup costs, the federal government chose to focus its efforts on making sure that no one cleaning up the oil spill is working without authorization.

The findings come from an exclusive report co-produced by Feet in Two Worlds (English) and El Diario (Spanish). Immigration and Customs Enforcement (ICE) in Louisiana has confirmed that their agents had made some rounds at command centers to check for undocumented workers.

“We visited just to ensure that people who are legally here can compete for those jobs — those people who are having so many problems,” said Temple H. Black, a spokesman for ICE in Louisiana.

The federal government has learned next to nothing from Katrina. During that epic disaster, thousands of Latino workers flocked to Louisiana to help with reconstructing decimated towns while the government stood haplessly staring in the face of disaster. Now these same heroic workers, who are risking their health and lives by exposing themselves to the toxic spill, are being accused of taking away jobs from Louisiana residents.

Contrary to popular opinion, undocumented workers are not taking American jobs, and given this international catastrophe, there is a pressing need to employ everyone possible to help with cleanup efforts.

ICE visited two command centers, one in Venice and the other in Hopedale, right after the Deepwater Horizon spill response team had gathered. They agents arrived without prior notice, rounded up workers, and asked for documentation of their legal status.

“They were civilians, they weren’t wearing uniforms and they were driving in cars that didn’t have the Immigration logo … dark cars with tinted glass,” said a 61-year-old Mexican-American woman named Cruz Stanaland, who remembers the ICE visit. That does aptly describe the mafia operation run by the Department of Homeland Security.

No one was detained because none of the workers were found to be undocumented. However, if they were working without papers, ICE confirmed they would have rounded up the workers and put them in detention, leaving fewer to clean up the oil spill.

It is even more disconcerting to hear that BP actually has no idea how to remove the oil from the marshes and the company’s real cleanup involves a propaganda campaign to protect its image and profits.

Federal enforcement priorities should focus on detaining and sanctioning BP executives instead of the workers they hire to protect the environment. After all, the White House has admitted that the oil spill will continue well into August and environmentalists are predicting a rippling effect around the world.

Maybe BP and the White House are hoping that if we wait long enough, the spill could become Latin America’s problem. Then, along with Haliburton, the trio could plan their invasion of Iran for oil while the DHS applies “top kill” to the refugees who try to escape the toxicity in their lives and environments by coming here.

Spill baby spill — as long as the spilling isn’t that of immigrants into the country.