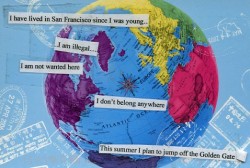 An anonymous undocumented youth from San Francisco sent in an artistic graphic to the PostSecret online community over the weekend, admitting that he wanted to commit suicide due to his immigration status.

Suicide is not a new phenomena for the undocumented youth population. A couple months ago, 19-year-old Gustavo Rezende made headlines for killing himself to escape deportation to Brazil. A 17-year-old undocumented student apprehended by cops after an illegal left turn, committed suicide in jail less than 48 hours later.

Similar stories probably never make it into the news due to the fact that surviving family members fear discovery and deportation. That is one of the reasons why undocumented youth must come out, speak openly, and be part of a growing community of organizers.

Surprisingly, the five sentences this particular anonymous youth put on a visual led to the creation of a Facebook group going by the name “please don’t jump” that has brought together more than 20,000 members in less than 2 days. That’s more than the number of people joining most groups for the DREAM Act, let alone immigration reform. It’s easier to organize around a message or person than it is to organize around changing policy.

“Come to Florida, you are wanted here,” “Canada wants you,” “go see an immigration lawyer,” and “just become legal” are certainly not helpful responses but well-intentioned. The Facebook group is a stark reminder of how so many people are clueless about an archaic United States immigration system that renders people illegal through no fault of their own.

However, it also provides hope for those who are undocumented that people do care and want to remedy their situation.