Home »Immigration»"Liberal" Massachusetts All Set to Be the Next Arizona 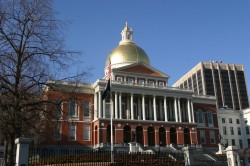 Senator Ted Kennedy is rolling in his grave.

Late last month, the Massachusetts Senate decided to join Arizona in the dark ages and approved sweeping changes to stop undocumented immigrants from accessing state healthcare, welfare, housing, unemployment and in-state tuition programs as part of a budget amendment that also includes a special hotline to snitch on businesses that hire undocumented workers.

It’s the rise of the Boston Tea Party. This initiative was actually a bipartisan measure, propelled to victory by the Democrats with a 28-10 vote in the Senate. Bitten by the SB 1070 bug, Sen. Steven Baddour (D-Methuen) suddenly decided that “we have an illegal immigration problem” in Massachusetts.” Sen. Robert O’Leary,  a grandson of immigrants, caught the virus too and parroted a right-wing talking point: “we are obligated to enforce the laws that are on the books.”

All is not yet lost. The House needs to pass a similar amendment that would need a hard push through conference committee and get the signature of a reluctant Governor to enact these stringent amendments into law.

Most of the Senate amendments are unnecessary given that undocumented immigrants are neither allowed access to state health care programs like Medicaid nor eligible for welfare, housing assistance, or even in-state tuition rates. The gesture is mostly symbolic: “we want to spend millions on a non-existent problem just because we cannot stand the idea of undocumented immigrants.” And it’s also about election year posturing, although immigration is hardly a deciding issue in elections and actually fuels backlash from immigrant communities.

Blocking undocumented student access to higher education is especially ludicrous. Studies show that the Bay State would gain millions from making colleges more accessible to undocumented immigrant youth. Governor Deval Patrick has spoken out in favor of in-state tuition for these students, and it remains to be seen whether he would put his stamp on this latest round of lunatic amendments.

Undeterred and unafraid, immigrant youth are holding an indefinite vigil outside the MA State House against the anti-immigrant amendments calling for the Senate to withdraw the amendments or for Governor Patrick to veto it.

Hang in there Senator Kennedy.