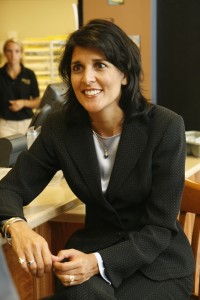 Move over, Bobby Jindal. There’s another Indian-American politician in the house, ready to take South Carolina by storm.

12 states held primary elections yesterday in what turned out to be a good night for GOP women, with ex-CEO Meg Whitman cruising over Steve Poizner in California. In South Carolina, braving racist slurs and allegations of extra-marital affairs, Tea Party candidate (and, ironically, the daughter of Indian Sikh immigrants), Nikki Haley thrashed her nearest opponent. But since she garnered only 49% of the vote, falling short of the required majority, Representative Gresham Barrett — famous for his proposed legislation to ban immigrants from terrorist countries — and Nikki Haley are now set for a run-off election.

Instead of hailing this as a win for immigrants or South Asians, the mainstream media is tagging it as a victory for the Tea Party. Which brings up another point to ponder: how exactly is the daughter of Sikh immigrants rising to prominence as the Sarah Palin-approved darling of a movement so imbued in backwards views of race?

For one, her name-change was crucial. Nikki Haley was born Nimrata Randhawa Haley but she adapted the nickname “Nikki” because of the fact that her real name “wouldn’t fit on a yard sign.” That worked out quite well, since many in the Tea Party might also have a hard time pronouncing and accepting her as Nimrata. Foreign-sounding names certainly can be political suicide.

Second, Haley became a Tea Party darling only after downplaying her Sikh heritage and playing the ambiguously white card. When Haley first ran for the state legislature in 2004 and became the first Indian-American to hold office in South Carolina, she seemed proud of her Sikh background. But during the elections this year, she evidently felt forced to adopt more mainstream, Christian values.

Third, given her South Carolina accent, American name and fair complexion, Haley was able to more comfortably fit into the stereotype of a model minority.

And finally, Haley probably rode the sympathy wave after enduring various racist slurs and widespread unproven allegations that she had committed adultery. Most notably, the Indian-American state senator was called a “f***king raghead” by another state senator — “raghead” being a racial slur typically used against people who wear turbans or headdresses.

“We already got one raghead in the White House. We don’t need another in the governor’s mansion,” said State Senator Jake Knotts on an internet radio show called Pub Politics. Besides screaming racism, the comment is a good indication that Knotts falsely believes Barack Obama is a Muslim and, furthermore, can’t tell the difference between a Muslim and a Sikh.

If it takes a “raghead” to be President of the United States or occupy the Governor’s mansion, then Nikki Haley is well on her way. Keep your eyes out for her on a GOP presidential ticket someday.