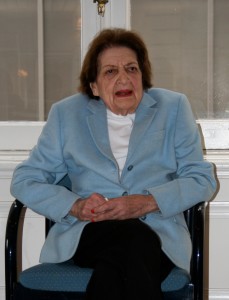 When former White House dean of correspondents Helen Thomas condemned Israel for its occupation of Palestine, she displayed more courage than the President or Congress on the issue.

However, Ms. Thomas — a venerable 89 years old — did misspeak on the matter. And for that, she was sent to the gallows by a hypocritical public and press.

During a “Jewish Heritage celebration” at the White House on May 27, Helen Thomas was asked what she thought about Israel and commented: “Tell them to get the hell out of Palestine.” Upon further prodding, Ms. Thomas stated that “Remember these people are occupied and it’s their land…” and those who are the occupiers should “…go home” to “Poland, Germany…And America and everywhere else.”

Not all critique of Israel is anti-Semitism, and it’s important to differentiate between the two. But the comments Ms. Thomas made struck a deep chord of disapproval across the board. The right-wing media was not about to back down, even after Helen Thomas apologized for her mis-statement. And while her comment was reprehensible, it is devastating that Ms. Thomas’s single botched answer ended her career of tough questions.

On Sunday, the agency Nine Speakers dropped Thomas as a client, stating that “in light of recent events, Nine Speakers is no longer able to represent Ms. Thomas, nor can we condone her comments on the Middle East.” Helen Thomas should be judged on the basis of her long career in probing journalism, not a 30-second sound bite — right?

What’s more, isn’t the United States supposed to protect and value free speech, regardless of subject matter? So how is it possible that such a trailblazing woman can lose her storied job and reputation, simply through that one gaffe? After all, former Arkansas Governor and paid Fox News contributor Mike Huckabee is still beloved, even after asking Palestinians to leave Israel. Double standards much?

If we applied the same standard to comments that are made about Muslims, “Mexicans” and African-Americans. a lot of people would be losing their jobs. People from Representative Barrett calling for a ban of all immigrants from “terrorist countries” to SC state senator Jake Knotts calling prospective state governor Nikki Haley a “f***king raghead” to the countless racially-biased comments made by Fox correspondents such as Glenn Beck, to name just a few examples. There are many more right-wing politicos who’ve said similarly senseless things on their jobs — people who don’t have anywhere near the career achievements of Helen Thomas.

Rae Abileah, an American of Israeli descent and grassroots coordinator with CODEPINK, says the extreme backlash and overnight blacklisting of Helen Thomas shows how American society is unable to use this incident as a teaching moment to educate and forgive. Rather, he says, the response to her statements shows total media bias, in which “anti-Semitism is immediately called out and rightly so, while Islamophobia is allowed to run rampant.” Such was the case with Helen Thomas, who happens to be the most prolific Arab-American journalist in United States history.

Instead of judging Ms. Thomas by her one-off sound bite, why not judge her by her response? As Ms. Thomas wrote, “I deeply regret my comments I made last week regarding the Israelis and the Palestinians. They do not reflect my heartfelt belief that peace will come to the Middle East only when all parties recognize the need for mutual respect and tolerance. May that day come soon.”